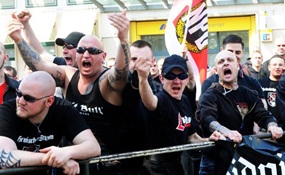 How should Europe respond to the recent rise in popularity of Far-Right wing groups?

Greece is for Greeks, France is for French and England is for English. What's wrong with a little bit of nationalism?
6 votes
0 comments
Embrace them. - Voter Comments
No Comments
Vote & Comment
2

This is history repeating itself, in times of economic crisis people often look towards extreme idealogies as they often provide scapegoats to the problem. Hitler was elected democratically and in just a few years he turned the Weimar Republic into ... a fascist dictatorship. Just imagine what they would do if they got elected   more
6 votes
2 comments
Suppress them - Voter Comments

Renegader says2015-04-03T17:46:59.8854407-05:00
Report Post
Address why so many of them are appearing (the root of the problem.) It seems to be related to the massive influx of Islamic migrants. Fix the immigration problem and these groups will go away.

These groups are only an insignificant minority, Anti-Immigrant protests by the NPD are heavily countered by anti-NPD protests by the rest of the population. Let them express their opinion, just as long as their is no violence. It is Freedom of Sp... eech after all   more
4 votes
2 comments
Ignore Them - Voter Comments

UtherPenguin says2015-04-03T17:51:32.7259427-05:00
Report Post
@Renegader The reason why there is so much immigration into Europe is because the fertility rate of Europe is too small to support itself anymore, if they blocked off immigration they would be going through the same problem as Japan, in a way Europe brought this upon itself.

Renegader says2015-04-03T18:06:53.7298342-05:00
Report Post
@UtherPenguin I disagree. Europe's fertility rate is stabilizing in the same way that Russia's has. The policy of endless immigration is causing much more negative effects than positive. There are also other ways to increase fertility rate than immigration. Offering child tax exemption policies works very well. If we stop the ridiculous immigration, these far right scum will disappear.

UtherPenguin says2015-04-03T18:17:04.2958938-05:00
Report Post
@Renegader Russia is facing a similar crisis, it's fertility rate is also just as low (https://www.Youtube.Com/watch?V=Y93ip0lMNJ8) The reason why Russia seems to not have as much of a problem is because they are already encouraging immigration from ethnic Russians and Russian speakers living abroad in Eastern Europe. However most European countries are not able to do the same strategy. Also what about the Svoboda? There is little immigration to Ukraine yet the Svoboda is still rising in popularity. The average fertility rate of Europe is roughly 1.59 children per woman. Which is not stable enough to maintain a populace without some form of immigration.

Kreakin says2015-04-03T18:46:58.8684993-05:00
Report Post
They are not just rascist, they are complete wingnuts that want to bring back capital punishment. Vote them in and you can only blame yourself when you are being flogged in the street for disagreeing or being in someother way unacceptable.