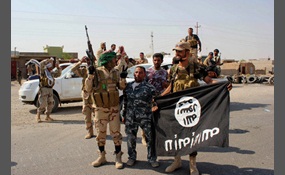 How should we call "ISIS"?

As in the organization's name. Many people argue over the name based on recognition. Some want to call them Daʿish because that' would not need to be changed based on territories, others provide limited recognition and only go for ISIS.

On 29 June 2014, the group renamed itself the Islamic State and declared it was a worldwide "caliphate". Accordingly, the 'Iraq and Shām' was removed from all official deliberations and communications, and the official name became the Islamic State ... from the date of the declaration. This name and the claim of caliphate have been widely criticised, with the UN, various governments, and mainstream Muslim groups refusing to use it   more
8 votes
1 comment
Islamic State - Voter Comments

Islamic State of Iraq and al-Sham/Syria

The name Daʿish is often used by ISIL's Arabic-speaking detractors. It is based on the Arabic letters Dāl, alif, ʻayn, and shīn, which form the acronym of ISIL's Arabic name al-Dawlah al-Islamīyah fī al-ʻIrāq wa-al-Shām. There are many spellings of ... this acronym, with DAESH gaining acceptance. ISIL considers the name Da'ish derogatory, because it sounds similar to the Arabic words Daes, "one who crushes something underfoot", and Dahes, "one who sows discord". ISIL also reportedly uses flogging as a punishment for those who use the name in ISIL-controlled areas   more
1 vote
0 comments
Daʿish/DAESH - Voter Comments
No Comments
Vote & Comment
4

Islamic State of Iraq and the Levant

The Organisation of Monotheism and Jihad

Jama'at al-Tawhid wal-Jihad (Organization of Monotheism and Jihad) was a militant Jihadist group led by the Jordanian national Abu Musab al-Zarqawi. This group's name may be abbreviated as JTJ or shortened to Tawhid and Jihad, Tawhid wal-Jihad, Tawh... id al-Jihad, Al Tawhid or Tawhid. The group started in Jordan, then became a decentralized network during the Iraq insurgency in which foreign fighters were widely thought to play a key role, though some analysts said that it may have also had a considerable Iraqi membership. Following al-Zarqawi's pledge of allegiance to Osama bin Laden's al-Qaeda network on October 17, 2004, the group became known as al-Qaeda in Iraq (official name Tanzim Qaidat al-Jihad fi Bilad al-Rafidayn). After several rounds of name changes and mergers with other groups, the organization is now known as Islamic State of Iraq and the Levant (ISIL or ISIS)   more
0 votes
0 comments
The Organisation of Monotheism and Jihad - Voter Comments
No Comments
Vote & Comment
6

Organization of Jihad's Base in Mesopotamia

Tanzim Qaidat al-Jihad fi Bilad al-Rafidayn, (TQJBR), ("Organization of Jihad's Base in Mesopotamia"‎), also referred to as al-Qaeda in Iraq (AQI) or al-Qaeda in Mesopotamia, was an Iraqi Sunni Islamic Jihadist organization affiliated with al-Qaeda....  It was a major combatant actor in the Iraqi insurgency and played a central role in the establishment of the Mujahideen Shura Council in Iraq and the Islamic State of Iraq   more
0 votes
0 comments
Organization of Jihad's Base in Mesopotamia - Voter Comments
No Comments
Vote & Comment
7

On 12 October 2006, the Mujahideen Shura Council merged with several more insurgent factions, and on 13 October the establishment of the ad-Dawlah al-ʻIraq al-Islāmiyah, also known as the Islamic State of Iraq (ISI), was announced. The leaders of th... is group were Abu Abdullah al-Rashid al-Baghdadi and Abu Ayyub al-Masri. After they were killed in a U.S.–Iraqi operation in April 2010, Abu Bakr al-Baghdadi became the new leader of the group   more
0 votes
0 comments
Islamic State of Iraq - Voter Comments
No Comments
Vote & Comment
Leave a comment...
(Maximum 900 words)

PetersSmith says2015-05-26T23:00:06.3254719-05:00
Report Post
It should be noted that calling them the Islamic State, acknowledges them as the Islamic caliphate. For simplicity, you just use acronyms. I hope all of you who voted for Islamic State realize this.

58539672 says2015-05-26T23:25:50.8730810-05:00
Report Post
@PetersSmith As I said, your overcomplicating the issue. My use of a name does not show my support for the organization. I support some form of Palestinian state but I don't go around saying PLO every time I talk about them just to be politically correct. I say Palestinian because its easy to understand to those who aren't familiar with the politically correct term. Islamic State is the most common name I here the organization called, with phrases like "the Islamic State, also known as ISIS or ISIL" being used in several media sources.