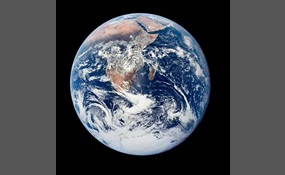 How was Earth Created?

The Big Bang theory is the prevailing cosmological model for the early development of the universe. The key idea is that the universe is expanding. Consequently, the universe was denser and hotter in the past. In particular, the Big Bang model sugge... sts that at some moment all matter in the universe was contained in a single point, which is considered the beginning of the universe. Modern measurements place this moment at approximately 13.82 billion years ago, which is thus considered the age of the universe. After the initial expansion, the universe cooled sufficiently to allow the formation of subatomic particles, including protons, neutrons, and electrons. Though simple atomic nuclei formed within the first three minutes after the Big Bang, thousands of years passed before the first electrically neutral atoms formed. The majority of atoms that were produced by the Big Bang are hydrogen, along with helium and traces of lithium. Giant clouds of these primordial elements later coalesced through gravity to form stars and galaxies, and the heavier elements were synthesized either within stars or during supernovae   more
16 votes
1 comment
Big Bang - Voter Comments

Creation, but not in 6 days.

7 votes
4 comments
Creation, but not in 6 days. - Voter Comments

Sebastian01 says2014-08-25T01:45:08.1934043-05:00
Report Post
The first law of physics says the matter can not be created or destroyed so it would take something above physics to create it. The other thing could be physics was made after it happened but that would be hard to prove.
Vote & Comment
3

In physical cosmology, the Big Crunch is one possible scenario for the ultimate fate of the universe, in which the metric expansion of space eventually reverses and the universe recollapses, ultimately ending as a black hole singularity or causing a...  reformation of the universe starting with another big bang. Sudden singularities and crunch or rip singularities at late times occur only for hypothetical matter with implausible physical properties   more
0 votes
0 comments
Big Crunch - Voter Comments
No Comments
Vote & Comment
5