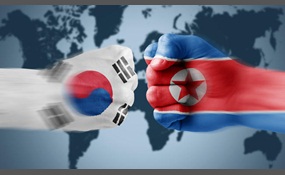 How will the Korean War Play Out?

Currently the U.S. holds to the Armastice Agreement while the North has denounced the legitimacy.

China interference results in a stalemate or World War.

Nothing. All will eventually be forgotten.

1 vote
0 comments
Nothing. All will eventually be forgotten. - Voter Comments
No Comments
Vote & Comment
5