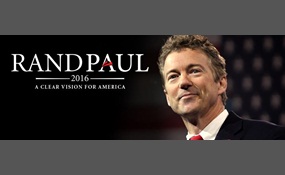 How will you feel about it when Rand wins the presidental election?

I know there are many uninformed/stupid people who would vote for Hillary, but if Rand won, how would you feel about it?

I would love it

4 votes
2 comments
I would love it - Voter Comments

I would be disappointed

SweetTea says2014-08-02T09:01:59.2446445-05:00
Report Post
America can't live through another spoiled-brat presidency. George W. Bush was NOT the president or leader that his father was. Aqua Buddha couldn't make a scab on his father's backside. Both forged political careers on their father's reputations -- not their own abilities. Both used the family name instead of their own resumes. Bush 43 was a lousy president. Rand Paul would be no different!
Vote & Comment
5

I would hate it

He's not winning the presidential election

1 vote
0 comments
It's like an abortion, there's no point in speculation when there's no potential. - Voter Comments
No Comments
Vote & Comment
8

It is still far enough away, who cares at this point

0 votes
0 comments
It is still far enough away, who cares at this point - Voter Comments
No Comments
Vote & Comment
Leave a comment...
(Maximum 900 words)