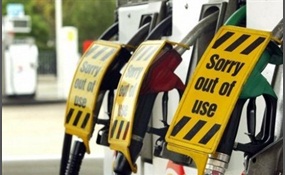 How would Americans respond if Oil ran out completely tomorrow?

Americans in Urban Areas only would go "Lord of the Flies"

Americans in rural areas would ban together in small communities to survive and support one another peacefully, but the cities would become an apocalyptic nightmare.
3 votes
1 comment
Americans in Urban Areas only would go "Lord of the Flies" - Voter Comments

A few degenerates would go "Lord of the Flies", but most would not

Most people would peacefully combine their resources to support one another and survive. The few/minority of degenerates that would prey on others would be quickly eliminated.
3 votes
3 comments
A few degenerates would go "Lord of the Flies", but most would not - Voter Comments

Ezk says2015-06-05T19:04:29.6133284-05:00
Report Post
This answer is the closest to what I believe. America, i.e. the US, would not react. No oil means no planes, no troops, no production of many goods, and the US, as most of the rest of the world would recede centuries. A few degenerates may go berserk, but most people will have to learn to depend on each other --for real, not like it is now. through the Internet. Also, the weakest will die --the ones who are more prone to illness and with limited cure, and virtually no more ambulances, they will be more likely to die. In general, more people will join in research and star to elicit electric power from the natural resources available. More wind power, more sun power, and more biomass. Until, a breakthrough will come to the rescue, and a new way or harnessing energy will be invented/discovered. Society will never return to what is now, but to something different, and perhaps greater.
Vote & Comment
4

Americans would ban together in total mutual support and cooporation

Pray to Jesus to solve all the problems

Most Americans would do nothing to help themselves, but would instead pray for divine intervention while everything went "Lord of the Flies".
0 votes
0 comments
Pray to Jesus to solve all the problems - Voter Comments
No Comments
Vote & Comment
6

The Government would use extreme force to squash any unrest

The U.S. Government would stop at nothing to remain in power, even if it meant enforcing starvation and death
0 votes
0 comments
The Government would use extreme force to squash any unrest - Voter Comments
No Comments
Vote & Comment
8

The American Government would cull the human population to reduce scarcity

Americans would go completely "Lord of the Flies"

Survival of the fittest would quickly ensue: horrific violence, destruction and complete anarchy. It would be the Apocalypse come true.
0 votes
0 comments
Americans would go completely "Lord of the Flies" - Voter Comments
No Comments
Vote & Comment
Leave a comment...
(Maximum 900 words)

tajshar2k says2015-04-19T09:28:42.4358702-05:00
Report Post
America isn't dependent on oil anymore, We are starting to research new technology that is renewable. Eventually oil will become ridiculously cheap. Because demand will go down.