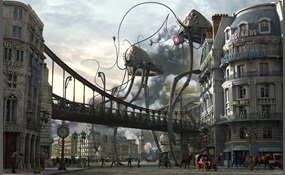 If a xenomorphic (alien) race discovered earth, what would they do?

Whether you believe in aliens or not, what do you think would be most likely to happen if they discovered us instead of us discovering them? The aliens are not set and thus you can presume what they are yourselves, which may influence your vote.

These humans appear to be useful for only two things: war and enslavement. Thus, we will breed them to be our slaves and construct our glorious monuments throughout the various other solar systems we conquer. We will enslave them to fight in pointle... ss wars and we will experiment on them because that is just what we do   more
5 votes
0 comments
Enslave Us - Voter Comments
No Comments
Vote & Comment
2

Try to help us

The humans clearly need our technological, environmental, biological, and/or medical superiority. Perhaps with our help we can end all of the issues that they seem to be starting themselves. We should be able to end the wars, hunger, diseases, and o... ther things that seem to plague them. Since we are so nice, we will even get past the fact they tried to kill us on several occasions   more
4 votes
2 comments
Try to help us - Voter Comments

The zoo hypothesis is one of many theoretical explanations for the Fermi Paradox. The hypothesis speculates as to the assumed behavior and existence of technically advanced extraterrestrial life and the reasons they refrain from contacting Earth. On... e interpretation of the hypothesis argues that intelligent alien life ignores Earth to allow for natural evolution and sociocultural development. The hypothesis seeks to explain the apparent absence of extraterrestrial life despite its generally accepted plausibility and hence the reasonable expectation of its existence. Aliens might, for example, choose to allow contact once the human race has passed certain technological, political, or ethical standards. They might withhold contact until humans force contact upon them, possibly by sending a spacecraft to planets they inhabit. Alternatively, a reluctance to initiate contact could reflect a sensible desire to minimize risk. An alien society with advanced remote-sensing technologies may conclude that direct contact with neighbors confers added risks to oneself without an added benefit   more
2 votes
1 comment
Create a planetary zoo - Voter Comments

These humans disgust us. We have watched them kill each other for resources or for their own personal gain. We have watched them starve to death while others can barely walk due to them being so overly obese. We watched as the rich scoff at the poor... . It would be best if we just left them alone   more
1 vote
1 comment
Leave us alone - Voter Comments

Kill us then/or enslave us and take our resources

Apparently aliens aren't that different from us after all. They appear to have been traveling across galaxies in search of new planets and thus resources to take. They are suffering from overpopulation and other resource issues and thus need everyth... ing they can get. They can either use us to gather these resources or build monuments, or they will kill us since we tend to get in the way of things   more
1 vote
0 comments
Kill us then/or enslave us and take our resources - Voter Comments
No Comments
Vote & Comment
6

Kill us, take a sample, then move on

One more down, infinity more to go until our universal ecosystem is finally complete!
0 votes
0 comments
Kill us, take a sample, then move on - Voter Comments
No Comments
Vote & Comment
7

Kill us then move on

The humans have destroyed the sanctity of the planet they are currently residing on. We should kill all of them to protect this planet and its beauty. It's not really worth it to do anything else.
0 votes
0 comments
Kill us then move on - Voter Comments
No Comments
Vote & Comment
8

The humans have devastated Terra so much that we don't even want to set foot on it. Time to try out our new planetary annihilator!
0 votes
0 comments
Destroy the Planet - Voter Comments
No Comments
Vote & Comment
9

The humans are so disgusting that their taint has spread throughout the entire Sol system, thus it must be destroyed. Time to try out our new black hole generator!
0 votes
0 comments
Destroy the Solar System - Voter Comments
No Comments
Vote & Comment
10

It would appear that these "xenomorph" creatures are not aliens at all. In fact, it is only one "creature" and it seeks to destroy all that is life. Unfortunately, everything has some "life" value to it and this "Devourer" really can't tell the diff... erence between a germ and an elephant; to be frank, it really doesn't care either way. May Darwin save us all   more
0 votes
0 comments
Destroy the Milky Way Galaxy - Voter Comments
No Comments
Vote & Comment
11

This alien species is a parasitoid and either use other animals as "hosts" for their offspring, or consume others to grow in strength. Regardless, it's bad news for us as with every other alien species these "things" have consumed. Game over man, ga... me over   more
0 votes
0 comments
Consume Us - Voter Comments
No Comments
Vote & Comment
Leave a comment...
(Maximum 900 words)

1Historygenius says2014-07-30T01:26:22.1520008-05:00
Report Post
I think if they know of us by now, but would prefer not to contact. For some reasons I feel aliens tend to research other planets but be isolationist to those without advanced technology.

PetersSmith says2014-07-30T01:30:25.7662856-05:00
Report Post
YamaVonKarma: Yama is apparently the "god of death", thus since it is a "god" and not an alien it cannot be included. However, if you prefer the "death" option you could choose the just "kill us then move on" option, or "destroy the milky way galaxy" which presumes that this creature is certainly the embodiment of death and thus seeks to destroy all living things.

PetersSmith says2014-07-30T13:17:14.2518680-05:00
Report Post
Muricamurray: Because xenomorph is a definitive term for "extraterrestrial creatures", while alien could mean illegal aliens or something that is "foreign".
Privacy Policy | Terms of Use
Sitemap | View Desktop Version
©2020 Debate.org. All rights reserved.