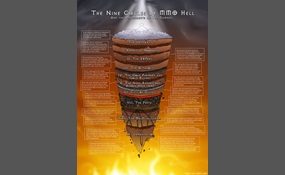 If Hell existed, which circle do you think you would go to based on your actions in life?

This is pure speculation, but be honest. Where do you think Minos will send you? Don't post "hell don't exist" because I am fully aware of this.

In Limbo reside the unbaptized and the virtuous pagans, who, though not sinful, did not accept Christ. Limbo shares many characteristics with the Asphodel Meadows; thus the guiltless damned are punished by living in a deficient form of Heaven. Witho... ut baptism ("the portal of the faith that you embrace" they lacked the hope for something greater than rational minds can conceive. Limbo includes green fields and a castle with seven gates to represent the seven virtues. The castle is the dwelling place of the wisest men of antiquity, including Virgil himself, as well as the Persian polymath Avicenna. In the castle Dante meets the poets Homer, Horace, Ovid, and Lucan; the Amazon queen Penthesilea; the mathematician Euclid; the scientist Pedanius Dioscorides; the statesman Cicero; the first doctor Hippocrates; the philosophers Socrates, Plato, Aristotle, and Averroes; the historical figures Lucretia, Lucius Junius Brutus, and Julius Caesar in his role as Roman general ("in his armor, falcon-eyed"); mythological characters Hector, Electra, Camilla, Latinus, and Orpheus; and many others. Interestingly, he also sees Saladin in Limbo (Canto IV). Dante implies that all virtuous non-Christians find themselves here, although he later encounters two (Cato of Utica and Statius) in Purgatory and two (Trajan and Ripheus) in Heaven   more
6 votes
0 comments
Limbo - Voter Comments
No Comments
Vote & Comment
2

In the second circle of Hell are those overcome by lust. Dante condemns these "carnal malefactors" for letting their appetites sway their reason. They are the first ones to be truly punished in Hell. These souls are blown back and forth by the terri... ble winds of a violent storm, without rest. This symbolizes the power of lust to blow one about needlessly and aimlessly   more
4 votes
0 comments
Lust - Voter Comments
No Comments
Vote & Comment
3

In the swampy waters of the river Styx, the wrathful fight each other on the surface, and the sullen lie gurgling beneath the water, withdrawn "into a black sulkiness which can find no joy in God or man or the universe." Phlegyas reluctantly transpo... rts Dante and Virgil across the Styx in his skiff. On the way they are accosted by Filippo Argenti, a Black Guelph from a prominent family. When Dante was forced to leave Florence, Argenti took all his property. When Dante responds "In weeping and in grieving, accursed spirit, may you long remain," Virgil blesses him. Literally, this reflects the fact that souls in Hell are eternally fixed in the state they have chosen, but allegorically, it reflects Dante's beginning awareness of his own sin(Cantos VII and VIII). Just as Argenti seized Dante's property, he himself is "seized" by all the other wrathful souls. The lower parts of Hell are contained within the walls of the city of Dis, which is itself surrounded by the Stygian marsh. Punished within Dis are active (rather than passive) sins. The walls of Dis are guarded by fallen angels. Virgil is unable to convince them to let Dante and him enter, and Dante is threatened by the Furies (consisting of Alecto, Megaera, and Tisiphone). An angel sent from Heaven secures entry for the poets, opening the gate by touching it with a wand, and rebukes those who opposed Dante. Allegorically, this reveals the fact that the poem is beginning to deal with sins that philosophy and humanism cannot fully understand. Virgil also mentions to Dante how Erichtho sent him down to the lowest circle of Hell to bring back a spirit from there (Cantos VIII and IX)   more
1 vote
0 comments
Anger - Voter Comments
No Comments
Vote & Comment
4

N the sixth circle, Heretics, such as Epicureans (who say "the soul dies with the body")are trapped in flaming tombs. Dante holds discourse with a pair of Epicurian Florentines in one of the tombs: Farinata degli Uberti, a Ghibelline (posthumously c... ondemned for heresy in 1283); and Cavalcante de' Cavalcanti, a Guelph, who was the father of Dante's friend and fellow poet Guido Cavalcanti. The political affiliation of these two men allows for a further discussion of Florentine politics (Canto X). Also seen here are Epicurus, Emperor Frederick II, and Pope Anastasius II—though some modern scholars hold that Dante erred in the verse mentioning Anastasius ("Anastasio papa guardo, lo qual trasse Fotin de la via dritta"), confusing the pope with the Byzantine emperor of the time, Anastasius I   more
1 vote
0 comments
Heresy - Voter Comments
No Comments
Vote & Comment
5

Here are the violent against God (blasphemers) and the violent against nature (sodomites and, as explained in the sixth circle, usurers). All reside in a desert of flaming sand with fiery flakes raining from the sky, a fate similar to Sodom and Gomo... rrah. The blasphemers lie on the sand, the usurers sit, and the sodomites wander about in groups. Dante sees the classical warrior Capaneus there, who for blasphemy against Zeus was struck down with a thunderbolt during the Siege of Thebes. Dante converses with two Florentine sodomites from different groups. One of them is Dante's mentor, Brunetto Latini; Dante is very surprised and touched by this encounter and shows Brunetto great respect for what he has taught him ("you taught me how man makes himself eternal; / and while I live, my gratitude for that / must always be apparent in my words"), thus refuting suggestions that Dante only placed his enemies in Hell.[35] The other sodomite is Iacopo Rusticucci, a politician, who blames his wife for his fate. Those punished here for usury include the Florentines Catello di Rosso Gianfigliazzi, Guido Guerra, Ciappo Ubriachi, and Giovanni di Buiamonte and the Paduan Reginaldo degli Scrovegni (who predicts that his fellow Paduan Vitaliano di Iacopo Vitaliani will join him here). They are identified not primarily by name but by heraldic devices emblazoned on the purses around their necks, purses which "their eyes seemed to feast upon" (Cantos XIV through XVII)   more
1 vote
1 comment
Violence (Inner Ring) - Voter Comments

The ninth and last circle is ringed by classical and Biblical giants, who perhaps symbolize pride and other spiritual flaws lying behind acts of treachery. The giants are standing on a ledge above the ninth circle of Hell, so that from the Malebolge...  they are visible from the waist up. They include Nimrod, Ephialtes (who with his brother Otus tried to storm Olympus during the Gigantomachy), Briareus, Tityos, and Typhon. The giant Antaeus (being the only giant unbound with chains) lowers Dante and Virgil into the pit that forms the ninth circle of Hell (Canto XXXI). The traitors are distinguished from the "merely" fraudulent in that their acts involve betraying a special relationship of some kind. There are four concentric zones (or "rounds") of traitors. These rounds correspond, in order of seriousness, to betrayal of family ties, betrayal of community ties, betrayal of guests, and betrayal of liege lords. In contrast to the popular image of Hell as fiery, the traitors are frozen in a lake of ice known as Cocytus, with each group encased in ice to progressively greater depths. In the very centre of Hell, condemned for committing the ultimate sin (personal treachery against God), is Satan. Satan is described as a giant, terrifying beast with three faces, one red, one black, and one a pale yellow   more
0 votes
0 comments
Treachery - Voter Comments
No Comments
Vote & Comment
8

This ring houses the violent against people and property. Sinners are immersed in Phlegethon, a river of boiling blood and fire, to a level commensurate with their sins: Dionysius I of Syracuse, Guy de Montfort, Obizzo d'Este, Ezzelino III da Romano... , Rinier da Corneto, and Rinier Pazzo are also seen in the Phlegethon as well as references to Atilla the Hun. The Centaurs, commanded by Chiron and Pholus, patrol the ring, shooting arrows into any sinners who emerge higher out of the river than each is allowed. The centaur Nessus guides the poets along Phlegethon and across a ford in the widest, shallowest stretch of the river (Canto XII). This passage may have been influenced by the early medieval Visio Karoli Grossi   more
0 votes
0 comments
Violence (Outer Ring) - Voter Comments
No Comments
Vote & Comment
9

In this ring are suicides and profligates. The suicides – the violent against self – are transformed into gnarled thorny bushes and trees and then fed upon by Harpies. Dante breaks a twig off one of the bushes and from the broken, bleeding branch he... ars the tale of Pietro della Vigne, who committed suicide after falling out of favour with Emperor Frederick II (his presence here, rather than in the ninth circle, indicates that Dante believes that the accusations made against him were false). Also here are Lano da Siena and Jacopo da Sant' Andrea. The trees are a metaphor for the state of mind in which suicide is committed.[33] Dante learns that these suicides, unique among the dead, will not be corporally resurrected after the final judgement since they gave away their bodies through suicide; instead they will maintain their bushy form, with their own corpses hanging from the thorny limbs. The other residents of this ring are the profligates, who destroyed their lives by destroying the means by which life is sustained – i.E., money and property. They are perpetually chased and mauled by ferocious dogs. The destruction wrought upon the wood by the profligates' flight and punishment as they crash through the undergrowth causes further suffering to the suicides, who cannot move out of the way (Canto XIII)   more
0 votes
0 comments
Violence (Middle Ring) - Voter Comments
No Comments
Vote & Comment
10

The "great worm" Cerberus guards the gluttons, who are forced to lie in a vile slush produced by ceaseless foul, icy rain (Virgil obtains safe passage past the monster by filling its three mouths with mud). In her notes on this circle, Dorothy L. Sa... yers writes that "the surrender to sin which began with mutual indulgence leads by an imperceptible degradation to solitary self-indulgence." The gluttons lie here sightless and heedless of their neighbors, symbolizing the cold, selfish, and empty sensuality of their lives. Just as lust has revealed its true nature in the winds of the previous circle, here the slush reveals the true nature of sensuality – which includes not only overindulgence in food and drink, but also other kinds of addiction   more
0 votes
0 comments
Gluttony - Voter Comments
No Comments
Vote & Comment
11

Those whose attitude toward material goods deviated from the appropriate mean are punished in the fourth circle. They include the avaricious or miserly (including many "clergymen, and popes and cardinals"), who hoarded possessions, and the prodigal,...  who squandered them. The two groups are guarded by a figure Dante names as Pluto, either Pluto the classical ruler of the underworld or Plutus the Greek god of wealth (who uses the cryptic phrase Papé Satàn, papé Satàn aleppe), but Virgil protects Dante from him. The two groups joust, using as weapons great weights which they push with their chest   more
0 votes
0 comments
Greed - Voter Comments
No Comments
Vote & Comment
Leave a comment...
(Maximum 900 words)