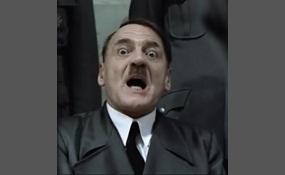 If Hitler had been captured, instead of committing suicide, what do you think the Allies would have done to him?

Screw the trial. Let's see how long we can keep him alive, while we torture him.

6 votes
1 comment
Screw the trial. Let's see how long we can keep him alive, while we torture him. - Voter Comments

Given him a fair trial

4 votes
3 comments
Given him a fair trial - Voter Comments

Gustav_Adolf_II says2014-07-08T14:43:33.0897173-05:00
Report Post
The allies (meaning the U.S., The British commonwealth, and France) would most likely give him a trial at Nuremberg like all the other Nazi leaders, then most likely execute him by either hanging or his own gas chambers. Unless Stalin found him first, that is, he would most likely toucher Hitler to death in the red square for a huge propaganda boost.
Vote & Comment
3

Questioned him for scientific, psychological, and military advancements

Help him escape via sub en-route to Argentina

But he was apparently bombed by a US ship having seen the sub, as some say.
1 vote
0 comments
Help him escape via sub en-route to Argentina - Voter Comments
No Comments
Vote & Comment
5

Give him community service

Say "good game", shake his hand, and let him go

Let all the remaining jews slap him each

Have him rap against Darth Vader

Force him to love Judaism

Force him to rape a Jew

Formerland1 says2014-07-08T09:54:25.8769512-05:00
Report Post
Testing him for scientific advancement would be hypocritical on the part of the allies considering thats what he did to the Jews .
Privacy Policy | Terms of Use
Sitemap | View Desktop Version
©2021 Debate.org. All rights reserved.