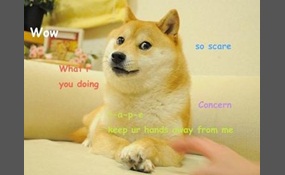 If I allow users to add answers to this poll, will they add doge to it?

I agree with the "Ultimate Bohab" sir...

Doge is stupid, you idiots

Is this poll stupid?

Horst Christian Simco better known by the stage name Riff Raff, is a rapper from Houston, Texas. He was originally managed by Swishahouse co-founder OG Ron C. Then after being associated with Soulja Boy's imprint S.O.D. Money Gang Inc., Riff Raff is...  now signed to producer Diplo's record label Mad Decent. He is also known for being a member of the rap group Three Loco along with Andy Milonakis and Dirt Nasty. His major label debut studio album Neon Icon was on June 24, 2014 on Mad Decent   more
0 votes
0 comments
RiFF - Voter Comments
No Comments
Vote & Comment
16

The Guy Who Put "Riff Raff is stupid"