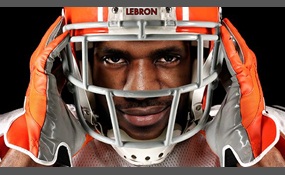 If LeBron were to be an NFL Player, what position would he be?

Left out linemen option because well, just use your brain.

A wide receiver is an offensive position in American and Canadian football, and is the key player in most of the passing plays. Only players in the backfield or the ends on the line are eligible to catch a forward pass. The two players who begin pla... y at the ends of the offensive line are eligible receivers, as are all players in the backfield. The backs and ends who are relatively near the sidelines are referred to as "wide" receivers. At the start of play, one wide receiver may begin play in the backfield, at least a yard behind the line of scrimmage, as is shown in the diagram at the right. The wide receiver on the right begins play in the backfield. Such positioning allows another player, usually the tight end, to become the eligible receiver on that side of the line. Such positioning defines the strong side of the field. This is the right side of the field in the diagram shown.The wide receiver is a position in American and Canadian football that functions as the pass-catching specialist. Wide receivers are among the fastest and most agile players in the game, and they are frequent highlight-reel favorites   more
5 votes
1 comment
Wide receiver - Voter Comments

The tight end is a position in American football and formerly Canadian football, on the offense. The tight end is often seen as a hybrid position with the characteristics and roles of both an offensive lineman and a wide receiver. Like offensive lin... emen, they are usually lined up on the offensive line and are large enough to be effective blockers. On the other hand, they are eligible receivers adept enough to warrant a defense's attention when running pass patterns.Because of the hybrid nature of the position, the tight end's role in any given offense depends on the tactical preferences and philosophy of the head coach. In some systems, the tight end will merely act as a sixth offensive lineman rarely going out for passes. Other systems utilize the tight end primarily as a receiver, frequently taking advantage of the tight end's size to create mismatches in the defensive secondary. Many coaches will often have one tight end who specializes in blocking in running situations while utilizing a better pass catching tight end in obvious passing situations.Offensive formations may have between zero and three tight ends at one time   more
1 vote
0 comments
Tight end - Voter Comments
No Comments
Vote & Comment
3

A running back is an American and Canadian football position, a member of the offensive backfield. The primary roles of a running back are to receive handoffs from the quarterback for a rushing play, to catch passes from out of the backfield, and to...  block. There are usually one or two running backs on the field for a given play, depending on the offensive formation. A running back may be a halfback or a fullback   more
1 vote
1 comment
Running back - Voter Comments