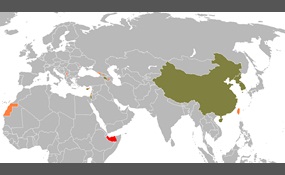 If one of the following non UN member states had to become a full member of the UN. Which would you rather have?

Explain why in the comments.

Taiwan, officially the Republic of China, is a sovereign state in East Asia. The Republic of China, originally based in mainland China, now governs the island of Taiwan, which makes up over 99% of its territory, as well as Penghu, Kinmen, Matsu, and...  other minor islands. Neighboring states include the People's Republic of China to the west, Japan to the east and northeast, and the Philippines to the south. Taipei is the seat of the central government. New Taipei, encompassing the metropolitan area surrounding Taipei proper, is the most populous city.The island of Taiwan was mainly inhabited by Taiwanese aborigines until the Dutch and Spanish settlement during the Age of Discovery in the 17th century, when Han Chinese began immigrating to the island. In 1662, the pro-Ming loyalist Koxinga expelled the Dutch and established the first Han Chinese polity on the island, the Kingdom of Tungning. The Qing Dynasty of China later defeated the kingdom and annexed Taiwan. By the time Taiwan was ceded to Japan in 1895, the majority of Taiwan's inhabitants were Han Chinese either by ancestry or by assimilation. The Republic of China was established in China in 1912   more
8 votes
1 comment
Taiwan - Voter Comments

Palestine (Arabic: فلسطين‎ Filasṭīn, Falasṭīn, Filisṭīn; Greek: Παλαιστίνη, Palaistinē; Latin: Palaestina; Hebrew: פלשתינה Palestina) is a conventional name, among others, used to describe the geographic region between the Mediterranean Sea and the ... Jordan River, and various adjoining lands. The region is also known as the Land of Israel (Hebrew: ארץ־ישראל Eretz-Yisra'el), the Holy Land and the Southern Levant, and historically has been known by other names including Canaan, Zion, Syria Palaestina, Southern Syria, Jund Filastin and Outremer. The boundaries of the region have changed throughout history, and were first defined in modern times by the Franco-British boundary agreement (1920) and the Transjordan memorandum of 16 September 1922, during the mandate period. Today, the region comprises the country of Israel and the Palestinian territories   more
3 votes
1 comment
Palestine - Voter Comments

VeteranPendragon says2015-05-02T23:17:15.7256728-05:00
Report Post
In today's modern age, there is a dire need for Palestinian recognition and acceptance. Addition to the UN would open up a lot of potential for Palestinian progress as a society and as a sovereign state. Palestinians have had a long, bloody series of conflicts with Israel over their treatment and right to the land. The Jews were largely a displaced people before, gaining recognition for the creation of a homeland state through the UN. Why can't the same thing be done for Palestine?
Vote & Comment
3

Abkhazia is a disputed territory and partially recognised state controlled by a separatist government on the eastern coast of the Black Sea and the south-western flank of the Caucasus.Abkhazia considers itself an independent state, called the Republ... ic of Abkhazia or Apsny. This status is recognised by Russia, Nicaragua, Venezuela, Nauru, and also by the partially recognised state of South Ossetia, and the unrecognised Transnistria and Nagorno-Karabakh.The Georgian government, United Nations and the majority of the world's governments consider Abkhazia a part of Georgia's territory, though Georgia is not in control of it. Under Georgia's official designation it is an autonomous republic, called the Autonomous Republic of Abkhazia, whose government sits in exile in Tbilisi.The status of Abkhazia is a central issue of the Georgian–Abkhazian conflict. The wider region formed part of the Soviet Union until 1991. As the Soviet Union began to disintegrate towards the end of the 1980s, ethnic tensions grew between the Abkhaz and Georgians over Georgia's moves towards independence   more
0 votes
0 comments
Abkhazia - Voter Comments
No Comments
Vote & Comment
5

The Sahrawi Arab Democratic Republic is a partially recognized state that controls a thin strip of landlocked area in the Western Sahara region and claims sovereignty over the entire territory of Western Sahara, a former Spanish colony. SADR was pro... claimed by the Polisario Front on February 27, 1976, in Bir Lehlou, Western Sahara. The SADR government controls about 20–25% of the territory it claims. It calls the territories under its control the Liberated Territories or the Free Zone. Morocco controls and administers the rest of the disputed territory and calls these lands its Southern Provinces. The SADR government considers the Moroccan-held territory to be occupied territory, while Morocco considers the much smaller SADR-held territory to be a buffer zone   more
0 votes
0 comments
Sahrawi Arab Democratic Republic - Voter Comments
No Comments
Vote & Comment
6

Transnistria is a breakaway state located mostly on a strip of land between the River Dniester and the eastern Moldovan border with Ukraine. Since its declaration of independence in 1990, and especially after the War of Transnistria in 1992, it has ... been governed as the Pridnestrovian Moldavian Republic, a state with limited recognition that claims territory to the east of the River Dniester, and also to the city of Bender and its surrounding localities on the west bank, in the historical region of Bessarabia. The names "Transnistria" and "Pridnestrovie" both refer to the Dniester River.Unrecognised by any United Nations member state, Transnistria is designated by the Republic of Moldova as the Transnistria autonomous territorial unit with special legal status, or Stînga Nistrului.After the dissolution of the USSR, tensions between the newly created Moldova and the de facto sovereign state of Pridnestrovia escalated into a military conflict that started in March 1992 and was concluded by a ceasefire in July 1992   more
0 votes
0 comments
Transnistria - Voter Comments
No Comments
Vote & Comment
7

Somaliland is a self-declared independent state that is internationally recognised as an autonomous region of Somalia. The government of Somaliland regards itself as the successor state to the British Somaliland protectorate, which became independen... t on 26 June 1960 as the State of Somaliland, before uniting with the Trust Territory of Somalia on 1 July 1960 to form the Somali Republic.Somaliland is bordered by Ethiopia in the south and west, Djibouti in the northwest, the Gulf of Aden in the north, and the autonomous Puntland region of Somalia to the east.In 1988, the Siad Barre regime launched a clampdown against the Hargeisa-based Somali National Movement and other rebel outfits, which were among the events that led to the Somali Civil War. The conflict left the economic and military infrastructure severely damaged. After the collapse of the central government in 1991, the local government, led by the SNM, declared independence from the rest of Somalia on 18 May of the same year.Since then, the territory has been governed by an administration that seeks self-determination as the Republic of Somaliland   more
0 votes
0 comments
Somaliland - Voter Comments
No Comments
Vote & Comment
8

Kosovo is a partially recognised state in Southeastern Europe that declared independence from Serbia in February 2008 as the Republic of Kosovo. While Serbia recognises the Republic's governance of the territory, it still continues to claim it as it... s own Autonomous Province of Kosovo and Metohija.Kosovo is landlocked in the central Balkan Peninsula. Its capital and largest city is Pristina. It is bordered by the Republic of Macedonia and Albania to the south, Montenegro to the west and Kosovo's remaining border to the north and east is seen by supporters of Kosovo's independence as a state border with Serbia whilst opponents of Kosovo's independence see it as a provincial border with Central Serbia. In antiquity, the Dardanian Kingdom, and later the Roman province of Dardania was located in the region. It was part of Serbia in the Middle Ages, and many consider the Battle of Kosovo of 1389 to be one of the defining moments in Serbian medieval history. After being part of the Ottoman Empire from the 15th to the early 20th century, in the late 19th century Kosovo became the centre of the Albanian independence movement with the League of Prizren   more
0 votes
0 comments
Republic of Kosovo - Voter Comments
No Comments
Vote & Comment
10

Northern Cyprus, officially the Turkish Republic of Northern Cyprus, is a self-declared state that comprises the northeastern portion of the island of Cyprus. Recognised by one state, Turkey, Northern Cyprus is considered by the international commun... ity as part of the Republic of Cyprus.Northern Cyprus extends from the tip of the Karpass Peninsula in the north east, westward to Morphou Bay and Cape Kormakitis, and southward to the village of Louroujina. A buffer zone under the control of the United Nations stretches between Northern Cyprus and the rest of the island and divides Nicosia, the island's largest city and capital of both states.The 1974 coup d'état, an attempt to annex the island to Greece, was followed by the Turkish invasion of Cyprus. This resulted in the eviction of much of the north's Greek Cypriot population, the flight of Turkish Cypriots from the south, and the partitioning of the island, leading to a unilateral declaration of independence by the North in 1983. Due to its lack of recognition, Northern Cyprus is heavily dependent on Turkey for economic, political and military support   more
0 votes
0 comments
Northern Cyprus - Voter Comments
No Comments
Vote & Comment
Leave a comment...
(Maximum 900 words)

Diqiucun_Cunmin says2015-04-27T04:10:56.4108830-05:00
Report Post
Absolutely not Taiwan, and I'd vote for one that won't hurt our relations with Russia, Central Asia or the African countries with which we're friendly. I don't know enough about international politics to know which one would do that though. :P

CyberConor says2015-04-27T14:36:07.9865304-05:00
Report Post
Agreed, coming from an american: I am tired of people saying that they are part of china, THEY AREN'T! They aren't even socialists, and total different government and currency, not even a providence.

Welliss says2015-04-27T16:53:29.2110460-05:00
Report Post
Recognizing Abkhazia and South Ossetia may improve relations with Russia as they recognize them as well. On another note: i feel like several of these places deserve independence. The only place i think definitely shouldn't be independent is North Cyprus