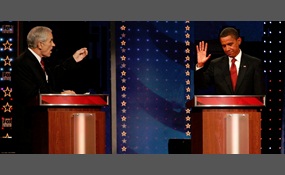 If the 2012 election had turned out different and ron paul had won the republican nomination, who would you vote for Ron Paul or Barack Obama?

Ronald Ernest “Ron” Paul is a 10-term Congressman, medical doctor (M.D.), and a 2008 presidential candidate from the U.S. state of Texas. As a Republican, he has represented Texas's 14th congressional district in the U.S. House of Representatives si... nce 1997, and had previously served as the representative from Texas's 22nd district in 1976 and from 1979 to 1985.Congressman Ron Paul advocates the limited role of government, low taxes, free markets, and a return to monetary policies based on commodity-backed currency. He has earned the nickname "Dr. No" for voting against any bill he believes violates the Constitution. In the words of former Treasury Secretary William Simon, Dr. Paul is the "one exception to the Gang of 535" on Capitol Hill. He has never voted to raise taxes or congressional pay; He voted against the Patriot Act and the Iraq War   more
7 votes
2 comments
Ron Paul - Voter Comments

gotleib says2014-07-10T20:21:19.0658382-05:00
Report Post
Great person throughout. He believes in freedoms which Barrack Obama does not. He continues to fight against people who go against freedoms. I do agree that some of his beliefs are primitive, but unlike Barrack Obama, who is given more money from Monsanto and Goldman Sachs (Sorry if wrong spelling) that he will retire where he vacations with the money he has. I don't think it takes a genius to understand that picking the person with less evil under their sleeve should have been picked. Trust me, if I payed Obama enough money he would go and get an NRA license and self-exile himself.
Vote & Comment
2

Barack Hussein Obama II (/bəˈrɑːk huːˈseɪn oʊˈbɑːmə/; born August 4, 1961) is the 44th and current President of the United States. He is the first African American to hold the office. Obama served as a U.S. Senator representing the state of Illinois...  from January 2005 to November 2008, when he resigned following his victory in the 2008 presidential election.Born in Honolulu, Hawaii, Obama is a graduate of Columbia University and Harvard Law School, where he was the president of the Harvard Law Review. He was a community organizer in Chicago before earning his law degree. He worked as a civil rights attorney in Chicago and taught constitutional law at the University of Chicago Law School from 1992 to 2004. He served three terms representing the 13th District in the Illinois Senate from 1997 to 2004   more
3 votes
3 comments
Barack Obama - Voter Comments

discomfiting says2014-07-10T20:07:06.9139413-05:00
Report Post
Ron Paul is one of the most disgusting politician I've seen. He's introduced a "family bill" with goals to privatized the education system and allow racial, gender and sexuality discrimination happen within the schools, stores and in public. If you're poor, you get no education. If you can't find a school that accepts you because of your race, gender or sexuality, oh well. He has no concept of understand foreign policies at all and his domestic policies are too far right. He'd abolish minimum wage, abolish the income tax and repeal so much government regulation that helps the people. He's abolish government funding to any LGBT organization that shows gay being okay and would abolish all socialized medicine like medicare. He doesn't care about freedom. He's a protectionist, he's a bigot, and a moron. We cannot deport 11.7 million people, privatize everything in America and bring us back to social atmosphere of 1700's. Basically, he's worse than Ronald Reagan.

Fight4Liberty says2014-07-10T21:17:42.6173667-05:00
Report Post
"He's introduced a "family bill" with goals to privatized the education system and allow racial, gender and sexuality discrimination happen within the schools, stores and in public. " 1984 bill. Discomfiting, Do you beleive force would change the minds and hearts of the people? I don't, because as you've seen through the Gay rights campaign, Conservatives which force their ideology on others end up causing conflict and tension. This is exactly how Ron was looking at it, the people cannot change by a forceful ruling by the government,only influence and ideas can change someone. Prior to contrary belief Ron is not a racist: https://www.Youtube.Com/watch?V=8Rv0Z5SNrF4 I am going to make many seperate responses to many of your comments. :)

discomfiting says2014-07-10T21:31:40.2921575-05:00
Report Post
I know it was from 1980's but if you look at his voting records and how he's voted on bills, it's consistent belief system of that bill. Also, saying things like 7. “I wouldn’t vote against getting rid of the Jim Crow laws.”, when asked if he would have voted for the Civil Rights Act isn't really convincing he's NOT a racist.

Fight4Liberty says2014-07-10T21:51:56.8244546-05:00
Report Post
"If you're poor, you get no education." (I averaged from this sight: http://taxes.about.com/od/statetaxes/a/highest-state-income-tax-rates.htm) Okay, first of all, he'd abolish the income tax and any taxes that'd have to do with social programs. Any idea how much that'd save struggling families? Average income tax 6%, $1200 of a $20,000 dollar annual wage leaves them with $18,800. This is income tax alone, imagine if we depleted income tax and all the other taxes? A huge ideal of Ron is community building, so the poor would be helped through the churches and private charities. Just take this for example; I come from a middle class family, (*gulp*) extremely religious. Something fascinating is my father has, from my memory, *once* spoiled himself on a $600 dollar purchase. He hasn't been on a vacation in seven years! My mom has to work a side job for us to go on vacation because my father simply won't use what we've been blessed with except to provide necessities for us. (After a eleven hour work day he'll go do yard work or something for someone who needs it!) The rest goes to overseas charities, our taxes, to our fellow brothers and sisters in Christ who are in need, and to our church. Our church runs a food pantry, mission trips overseas to orphanages, people in the community who are in need are not forgotten. The thing I find sad is a lot of charitable Liberals tend to believe is us Republicans, (I'm independent,) just like to hog our money. In my lifetime, I've seen nothing farther from the truth. (I think I just went on a rabbit trail here XD) So, in short, schools run by local levels would receive local donations.

SweetTea says2014-07-12T04:24:36.1644168-05:00
Report Post
Ron Paul was never really interested me. Many of his followers acted so stupid with their wild hats & signs about "Revolution" ... Standing on street corners ... Screaming at people. LoL! Now, Ross Perot was different. Back in '92, Perot really fought the establishment with a serious campaign. I think he got 20% of the vote in the general election.
Privacy Policy | Terms of Use
Sitemap | View Desktop Version
©2020 Debate.org. All rights reserved.