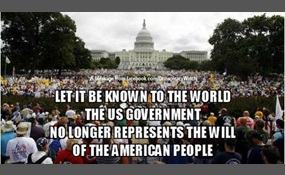 If the United States experienced a nation-wide revolution, should the nations of this world band together to put the American government down?

Alright, to make things clear. Here's a logical scenario: Obama, or the next president, declares martial law and turns the US into a police state. The US people, after several of them have been unjustly imprisoned, have risen up against the tyrannical government. Should the other nations help them?

No, help the American government instead

We can't allow the people of the United States to ruin the stability of the world, put the revolution down fast and hopefully not much damage will be done.
5 votes
1 comment
No, help the American government instead - Voter Comments

No, stay out of it entirely

It's not worth it, let the American people fight amongst themselves.
2 votes
0 comments
No, stay out of it entirely - Voter Comments
No Comments
Vote & Comment
3

Yes, but only economically and munitions-wise.

Aiding the American people with military support can be a risky business. The US military is powerful and we don't want to risk thousands of lives being lost or worse, a nuclear war. We should give them financial aid and some munitions, but that's a... bout it   more
1 vote
0 comments
Yes, but only economically and munitions-wise. - Voter Comments
No Comments
Vote & Comment
4

Meanwhile in Switzerland: "Ladies, Gentlemen, Putin," the UK said as he addressed the nations of this world. "Don't start," Russia responded with aggression. The UK glared at Russia and sighed. "Anyway, I presume you are wondering why I gathered y... ou all here today." "Why is Taiwan here?" China asked abruptly. "Why are you here, Commie?" Taiwan responded. "Alright, if you guys aren't going to behave then you can get out!" Germany announced angrily. "Thank you, Germany; now, back to business." The camera intensely zooms on the UK. "It has come to our attention that the people of the United States of America are sick of their government oppressing them." "So are we," Iran said, cutting the UK off. "Says you," France sneered. "Enough, enough! We need to address the issue at hand. As hopefully you all understand the United States has a strong grip on many of you here. They are invested into this world, they consider themselves to be the peacekeepers, those that prevent this world from falling apart." "What good they have done," Russia said sarcastically. "Swear to God, Russia, don't start with me. Now, the people seek to topple their so-called tyrannical government and replace it with a more "loose" one. This may be an issue to us, considering the fact they will probably favor anti-military actions and less investments." "So they won't pay their trillions of dollars in debt? Pity," China remarked. "Right, anyway, we are the nations of this world that the US have had foreign entanglements with. Thus, I think it is in our best interests to decide what to do with this situation. On one side we can intervene and help the American people restore their freedom. On the other side we can help the American government restore order. But we always have the option to stay out of it entirely." "Okay, okay. Presume we do intervene, what's in it for us?" Brazil asked. "Yeah, what's in it for us?" Many other nations demanded to know. "I guess that's what we need to decide on," the UK answered. "Can we like remove the border fence? Even I want to escape my country," Mexico announced. "I have an idea, how about we force them to pay back their debts?" China suggested. "Can they help us invade North Korea?" South Korea asked. The nations of the world looked around. "Where is North Korea anyway?" Japan asked. "I invited him," China answered. "He probably made his own meeting," Italy said as he rolled his eyes. "Makes sense, but back to the subject at hand." "Can I have Alaska back?" Russia suddenly said. The room grew silent until Canada answered, "No." The nations of the world started to argue about what they wanted to do with the United States. Some of them suggested letting them have their autonomy, others wanted to divide the country, while others wanted to install a puppet state. Germany grew irritated and yelled, "ENOUGH! We must come to a majority decision!" "Since when did you speak for all of us," France pestered. "Don't make me invade you again," Germany responded and France sat back down. "Alright, Germany is right. We need to agree on what to do." "How about we just, you know, let them be once we help them. Let them make their own decisions," Poland suggested. Many forgot that Poland was in the room, so it was a shock to hear his voice. "Um, actually, that doesn't sound like a bad idea. Let them start their own nation back up again and maybe they can finally leave us alone unless we ask for help. After all, they will be indebted to us," Switzerland suggested. "Yes, more debt, just what we need," China glared. "No, debt as in they owe us one," India answered. "No one should owe you anything," Pakistan barked. "Guys, calm down! This isn't about us it's about the United States. They asked for our help and I think we should give it to them," Poland suggested. "Since when do you make the rules, Poland?" Russia smirked. "You know what, Poland is right. I think we should intervene and help the American people!" the UK exclaimed. "Who's with me!" Australia, Canada, New Zealand, and the rest of the UK's supporters raised their hands as well. The other nations sat idle and wondered what they should do. "Alright, no point in dragging this out," China announced as he raised his hand. China's supporters were shocked, but had no choice to raise their hands as well. Soon, the dramatic music began to play and more and more nations started raising their hands. The Middle Eastern nations were hesitant at first, especially when Israel raised his hand. However, they eventually agreed when Iraq unexpectedly raised his. All that was left was Russia and his satellite states. All of the eyes in the room were on Russia. Russia sighed and then raised his hand, but then quickly put it back down. "Only if I get Alaska." "Oh boy, here we go again," Canada said as he rolled his eyes. "How about this: we will ask the people of Alaska if they want to join you. If the majority agree, you can have it." "Agreed," Russia grinned. "And it better not be like the Ukraine referendum," several nations added. Russia seemed defeated and then raised his hand, "Fine." "Alright, then it's decided. We will go to war!" "DID SOMEONE SAY WAR!?" North Korea suddenly barged into the room, falling over everything in his way. "Goddammit.   more
0 votes
0 comments
Yes, help militarily - Voter Comments
No Comments
Vote & Comment
Leave a comment...
(Maximum 900 words)

Seido says2014-08-07T16:12:12.7340201-05:00
Report Post
This is pretty far departed from reality... But alright. It really depends on why the president put the US into martial law, and how the military and police were acting. I somehow doubt that the police and military, both of which are comprised of American citizens, would really allow the president to maintain a state of martial law if it wasn't entirely justified. Throwing my suspension of disbelief aside entirely though, and assuming that the president, the police, and the military were all corrupted to the point where they were acting irrationally, the world SHOULD help the citizens of the US rise up through any means necessary.

PetersSmith says2014-08-07T16:17:12.6451735-05:00
Report Post
Seido: There were times in US history when the military and police assaulted protesters and such because they were just doing what they were paid to do.

Seido says2014-08-07T16:17:55.1642821-05:00
Report Post
We don't really have those here, and I highly doubt we'd ever get to the point where we'd brainwash people to that extent. In any event, we'd still have plenty of sane people in the police, military, general public, and national guard with guns who could handle such an issue.

dmussi12 says2014-08-07T16:20:36.8509691-05:00
Report Post
I don't think this question can even be answered (I voted on accident) because the premise is impossible. No president could declare martial law. Not possible. There's no way he would get enough support, even within his party. For the scenario to be possible, a lot of things would have to change. We'd have to go into a depression, new technology would need to be invented to control/suppress people, and the very nature of our economy and government would need to change. A more realistic premise would be some radical conservatives involved in a minor revolt somewhere in the Deep South and the National Guard would need to be sent in to squash it. I could see this happening if H. Clinton gets elected.

Seido says2014-08-07T16:21:04.6299256-05:00
Report Post
@Peters I'm not saying that the revolution should be put down, per se. I just doubt such a corrupt scenario could ever play out. If the revolutionaries were justified, then support them. If they're just a bunch of idiotic right wingers from the south that think the government is oppressing them when they aren't, then don't.

PetersSmith says2014-08-07T16:22:51.9131887-05:00
Report Post
Seido: We're presuming it has to be justified. Like dmussi12 said, I think this scenario could be plausible in the future, slightly, but still possible. Our resources could start draining, the economy could crash, another war could have started and ended recently, things like that.

Seido says2014-08-07T16:25:05.4049691-05:00
Report Post
@dmussi I kinda doubt that the deep south would get riled up by someone like Hillary. We haven't had that level of idiocy as a result of Obama, so I kinda doubt the ultra conservatives would act much differently with Hillary. Elizabeth Warren on the other hand, who I support as a far left winger, might piss them off.

iggy1993 says2014-08-07T17:01:14.5725625-05:00
Report Post
A revolution is next to impossible, consider that the US government has been spending more on weapons and military than the rest of the world combined! And we have all seen what US military occupation looks like, there is no breaking it. The more plausible situation would be that they put the country under martial law (which they are getting pretty close to as it is) and pursuing their goals more freely. The rest of the world wouldn't be able to anything about it then and would be trembling in fear since the only thing preventing them from going all out is public opinion, although it's more than likely that the people in the US would be lead to believe that they are being attacked by some outer force in order to keep them at bay. It's totalitarianism 101
Privacy Policy | Terms of Use
Sitemap | View Desktop Version
©2020 Debate.org. All rights reserved.