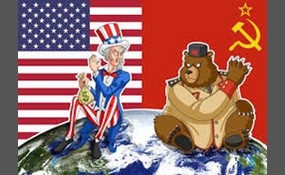 If the United States invaded Russia, who would win without the use of nukes?

The United States of America, commonly referred to as the United States, America or simply the States, is a federal republic consisting of 50 states and a federal district. The 48 contiguous states and the federal district of Washington, D.C., are i... n central North America between Canada and Mexico. The state of Alaska is the northwestern part of North America and the state of Hawaii is an archipelago in the mid-Pacific. The country also has five populated and nine unpopulated territories in the Pacific and the Caribbean. At 3.79 million square miles in total and with around 317 million people, the United States is the fourth-largest country by total area and third largest by population. It is one of the world's most ethnically diverse and multicultural nations, the product of large-scale immigration from many countries. The geography and climate of the United States is also extremely diverse, and it is home to a wide variety of wildlife.Paleo-indians migrated from Asia to what is now the U.S. mainland around 15,000 years ago, with European colonization beginning in the 16th century. The United States emerged from 13 British colonies located along the Atlantic seaboard. Disputes between Great Britain and these colonies led to the American Revolution. On July 4, 1776, delegates from the 13 colonies unanimously issued the Declaration of Independence. The ensuing war ended in 1783 with the recognition of independence of the United States from the Kingdom of Great Britain, and was the first successful war of independence against a European colonial empire. The current Constitution was adopted on September 17, 1787. The first 10 amendments, collectively named the Bill of Rights, were ratified in 1791 and guarantee many fundamental civil rights and freedoms   more
18 votes
4 comments
United States of America - Voter Comments

Russia or, also officially known as the Russian Federation, is a country situated in northern Eurasia. It is a federal semi-presidential republic. From northwest to southeast, Russia shares land borders with Norway, Finland, Estonia, Latvia, Lithuan... ia and Poland, Belarus, Ukraine, Georgia, Azerbaijan, Kazakhstan, China, Mongolia, and North Korea. It shares maritime borders with Japan by the Sea of Okhotsk, the U.S. state of Alaska across the Bering Strait and Canada's Arctic islands. At 17,075,400 square kilometres, Russia is the largest country in the world, covering more than one-eighth of the Earth's inhabited land area. Russia is also the world's ninth most populous nation with 143 million people as of 2012. Extending across the entirety of northern Asia and much of Eastern Europe, Russia spans nine time zones and incorporates a wide range of environments and landforms.The nation's history began with that of the East Slavs, who emerged as a recognizable group in Europe between the 3rd and 8th centuries AD. Founded and ruled by a Varangian warrior elite and their descendants, the medieval state of Rus arose in the 9th century. In 988 it adopted Orthodox Christianity from the Byzantine Empire, beginning the synthesis of Byzantine and Slavic cultures that defined Russian culture for the next millennium. Rus' ultimately disintegrated into a number of smaller states; most of the Rus' lands were overrun by the Mongol invasion and became tributaries of the nomadic Golden Horde. The Grand Duchy of Moscow gradually reunified the surrounding Russian principalities, achieved independence from the Golden Horde, and came to dominate the cultural and political legacy of Kievan Rus'. By the 18th century, the nation had greatly expanded through conquest, annexation, and exploration to become the Russian Empire, which was the third largest empire in history, stretching from Poland in Europe to Alaska in North America   more
13 votes
8 comments
Russia - Voter Comments

Duskterror_The_Mechanical says2014-05-02T08:44:19.4223857-05:00
Report Post
Russia would win. Even if the USA would destroy Russias army, the USA would have no way to occupy a country that huge. The constant guerrilla like attacks would force the USA out of there.

asparagus21 says2014-05-03T09:35:48.1926199-05:00
Report Post
I am an American, and if the Russians attacked the Americans then we would win. HOwever, if we attacked Russia in their home terrain they would destroy us just as they have destroyed everyone who has attacked Russia before.
Vote & Comment
Leave a comment...
(Maximum 900 words)

ararmer1919 says2014-05-02T12:48:18.1302088-05:00
Report Post
To the commenters on Russia side. 1. It's not winter and the argument that decades and centuries ago people were unable to invade Russia is a poor argument. It's called "technology", which the US is the leading nation in. Cold weather is no longer that big of a factor. Sorry to tell you pro Russians that. 2. If you think Russia will have 70,000,000 men fighting for them then you are high. Even with all the nations that fought in WW2 and WW1 combined you still wouldn't reach 70 million. And furthermore why would you want that many? That's a logistical suicidal nightmare. How are you going to free 70 million troops? Train them? Arm them? Cloth them? Transport them? I can keep going with this. 70 million soldiers would be a disaster for any military. 3. Who said anything about occupy? You think we will fight a war with Russia the same way as they bullcrap "mini wars" like Iraq and Afghanistan where the objective was to "win the hearts and minds of the people"? Hell no. It's going to be scorch earth, burn it down, drop as many bombs as humanly possible. Kill kill kill. You think civilian casualties will even be a consideration in such a war? Lol. 4. US/UK VS China/Russia. US/UK win. But it dosent matter because China would never get involved. The US and China, as well as most of the EU, are economical butt buddies. Very few things on this earth will lead the US and China into conflict and the defense of Russia is so laughably not one of them.