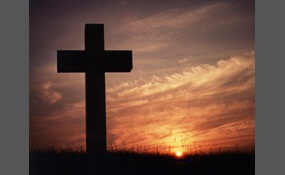 If you are Christian, what sect would you identify with?

If I missed any major sects, let me know so I can add them.

The Catholic Church, also known as the Roman Catholic Church, is the largest Christian church, with more than 1.2 billion members worldwide. It is among the oldest religious institutions in the world, and has played a prominent role in the history o... f Western civilisation. The Catholic hierarchy is headed by the Bishop of Rome, known as the Pope. The Catholic Church teaches that it is the one true church founded by Jesus Christ, that its bishops are the successors of Christ's apostles and that the Pope is the sole successor to Saint Peter, who has primacy among the apostles. The Church maintains that the doctrine on faith and morals that it presents as definitive is infallible.The Catholic Church is Trinitarian and defines its mission as spreading the Gospel of Jesus Christ, administering the sacraments and exercising charity. Its principal doctrines are found in the Nicene Creed. Worship is highly liturgical, focussing on the Mass in which the sacrament of the Eucharist is offered as a sacrifice for sin. The Church teaches that through Eucharistic consecration bread and wine become the body and blood of Christ, a change it calls transubstantiation   more
8 votes
3 comments
Catholic - Voter Comments

Baptists are individuals who comprise a group of denominations and churches that subscribe to a doctrine that baptism should be performed only for professing believers, and that it must be done by complete immersion. Other tenets of Baptist churches...  include soul competency, salvation through faith alone, Scripture alone as the rule of faith and practice, and the autonomy of the local congregation. Baptists recognize two ministerial offices, pastors and deacons. Baptist churches are widely considered to be Protestant churches, though some Baptists disavow this identity.Diverse from their beginning, those identifying as Baptists today differ widely from one another in what they believe, how they worship, their attitudes toward other Christians, and their understanding of what is important in Christian discipleship.Historians trace the earliest church labeled "Baptist" back to 1609 in Amsterdam, with English Separatist John Smyth as its pastor. In accordance with his reading of the New Testament, he rejected baptism of infants and instituted baptism only of believing adults   more
2 votes
0 comments
Baptist - Voter Comments
No Comments
Vote & Comment
3

Mormonism is the predominant religious tradition of the Latter Day Saint movement of Restorationist Christianity. This movement was founded by Joseph Smith in the 1820s. During the 1830s and 1840s, Mormonism gradually distinguished itself from tradi... tional Protestantism. Mormonism today represents the new, non-Protestant faith taught by Smith in the 1840s. After Smith's death, most Mormons followed Brigham Young on his westward journey, calling themselves The Church of Jesus Christ of Latter-day Saints. Variations not a part of the LDS Church include Mormon fundamentalism, which seeks to maintain practices and doctrines such as polygamy that were abandoned by the LDS Church, and various other small independent denominations.The word Mormon is originally derived from the Book of Mormon, one of the faith's religious texts. Based on the name of that book, early followers of founder Joseph Smith were called Mormons, and their faith was called Mormonism. The term was initially considered pejorative, but is no longer considered so by Mormons   more
2 votes
0 comments
Mormon - Voter Comments
No Comments
Vote & Comment
4

The Eastern Orthodox Church, officially the Orthodox Catholic Church, and also referred to as the Orthodox Church and Orthodoxy, is the second largest Christian church in the world, with an estimated 225–300 million adherents, most of whom live in E... astern Europe, Southern Europe, the Middle East, and Russia. It identifies itself as the continuation of the One, Holy, Catholic and Apostolic Church established by Jesus Christ in his Great Commission to the apostles, encompassing the fullness of the Christian faith.The Church has grown into a global religion, with churches in most of the countries of the world and almost every major city. Its adherents are a majority in Belarus, Bulgaria, Cyprus, Georgia, Greece, Macedonia, Moldova, Montenegro, Romania, Russia, Serbia and Ukraine; significant minority populations exist in Bosnia and Herzegovina, Albania, Kazakhstan, Israel, Jordan, Lebanon and Syria   more
1 vote
0 comments
Eastern Orthodox - Voter Comments
No Comments
Vote & Comment
5

Lutheranism is a major branch of Protestant Christianity that identifies with the theology of Martin Luther, a German friar, ecclesiastical reformer and theologian.Luther's efforts to reform the theology and practice of the Catholic Church launched ... the Protestant Reformation in German-speaking territories of the Holy Roman Empire. Beginning with the Ninety-Five Theses, first published in 1517, Luther's writings were disseminated internationally, spreading the early ideas of the Reformation beyond the influence and control of the Roman Curia and the Holy Roman Emperor. The split between the Lutherans and the Catholics was made clear and open with the 1521 Edict of Worms: the edicts of the Diet condemned Luther and officially banned citizens of the Holy Roman Empire from defending or propagating his ideas, subjecting advocates of Lutheranism to forfeiture of all property, specifying half of any seized property forfeit to the Imperial government and the remaining half forfeit to the party who brought the accusation   more
1 vote
0 comments
Lutheran - Voter Comments
No Comments
Vote & Comment
6

Anglicanism is a tradition within Christianity comprising the Church of England and churches which are historically tied to it or have similar beliefs, worship practices and church structures. The word Anglican originates in ecclesia anglicana, a me... dieval Latin phrase dating to at least 1246 that means the English Church. Adherents of Anglicanism are called Anglicans. The great majority of Anglicans are members of churches which are part of the international Anglican Communion. There are, however, a number of churches outside of the Anglican Communion which also consider themselves to be Anglican, most notably those referred to as Continuing Anglican churches, and those which are part of the Anglican realignment movement.Anglicans found their faith on the Bible, traditions of the apostolic church, apostolic succession, and writings of the Church Fathers. Anglicanism forms one of the branches of Western Christianity; having definitively declared its independence from the Pope at the time of the Elizabethan Religious Settlement. Many of the new Anglican formularies of the mid-16th century corresponded closely to those of contemporary Reformed Protestantism   more
0 votes
0 comments
Anglican - Voter Comments
No Comments
Vote & Comment
7

The Coptic Orthodox Church of Alexandria is the official name for the largest Christian church in Egypt and the Middle East.According to tradition, the church was established by Saint Mark, an apostle and evangelist, in the middle of the 1st century... . The head of the church and the See of Alexandria is the Patriarch of Alexandria on the Holy See of Saint Mark. The See of Alexandria is titular and nowadays the Coptic Pope seat is Saint Mark's Coptic Orthodox Cathedral in the Abbassia District in Cairo.The Church belongs to the Oriental Orthodox family of churches, which has been a distinct church body since the Council of Chalcedon in AD 451, when it took a different position over Christological theology from that of the Eastern Orthodox Church. The precise differences in theology that caused the split with the Coptic Christians are still disputed, highly technical, and mainly concerned with the nature of Christ. The foundational roots of the Church are based in Egypt, but it has a worldwide following.As of 2012, about 10% of Egyptians belonged to the Coptic Orthodox Church of Alexandria   more
0 votes
0 comments
Coptic - Voter Comments
No Comments
Vote & Comment
8

Unaffiliated is a status for registered voters in New Jersey. Those voters who do not specify a political party affiliation when they register to vote are listed as unaffiliated.New Jersey is a closed primary state. This means that only voters who a... ffiliate with a political party may vote in that party's candidate selection process. However, unaffiliated voters may declare their party affiliation up to and including the day of the primary election. Unaffiliated status does not affect participation in general elections.Affiliated voters may change their status to unaffiliated or to another political party if they wish, although any such change must be filed with the state 55 days before the primary election   more
0 votes
0 comments
Unaffiliated - Voter Comments
No Comments
Vote & Comment
9

Presbyterianism is a branch of Reformed Protestantism which traces its origins to the British Isles. Presbyterian churches derive their name from the presbyterian form of church government, which is government by representative assemblies of elders....  Many Reformed churches are organized this way, but the word "Presbyterian," when capitalized, is often applied uniquely to the churches that trace their roots to the Scottish and English churches that bore that name and English political groups that formed during the English Civil War. Presbyterian theology typically emphasizes the sovereignty of God, the authority of the Scriptures, and the necessity of grace through faith in Christ. Presbyterian church government was ensured in Scotland by the Acts of Union in 1707 which created the kingdom of Great Britain. In fact, most Presbyterians found in England can trace a Scottish connection, and the Presbyterian denomination was also taken to North America mostly by Scots and Scots-Irish immigrants. The Presbyterian denominations in Scotland hold to the theology of John Calvin and his immediate successors, although there is a range of theological views within contemporary Presbyterianism   more
0 votes
0 comments
Presbyterianism - Voter Comments
No Comments
Vote & Comment
Leave a comment...
(Maximum 900 words)

emporer1 says2015-05-24T23:48:32.5613808-05:00
Report Post
@marathonmalachi however, the book of Mormon was written in ancients times in the Americas on the gold plates. It isn't an adition to the lords words in the bible, but his words in a compleatly different book written simultaneously. Mormons did not change or add to anything in the bible. Mormons share most beliefs in common with other Christian religions.

marathonmalachi says2015-05-25T00:41:17.3053260-05:00
Report Post
@emporor1 Mormons believe that Jesus is a created being. The Bible clearly teaches that he is eternal and one with God. Bible also says that there is only one God in three persons, while Mormonism teaches that we can all achieve godhood.