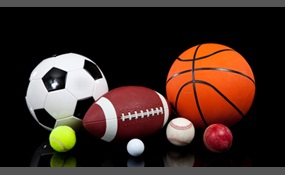 If you could be a professional athlete, which sport would you play?

Baseball is a bat-and-ball game played between two teams of nine players each who take turns batting and fielding.The offense attempts to score runs by hitting a ball thrown by the pitcher with a bat and moving counter-clockwise around a series of f... our bases: first, second, third, and home plate. A run is scored when a player advances around the bases and returns to home plate.Players on the batting team take turns hitting against the pitcher of the fielding team, which tries to prevent runs by getting hitters out in any of several ways. A player on the batting team who reaches a base safely can later attempt to advance to subsequent bases during teammates' turns batting, such as on a hit or by other means. The teams switch between batting and fielding whenever the fielding team records three outs. One turn batting for both teams, beginning with the visiting team, constitutes an inning. A game comprises nine innings, and the team with the greater number of runs at the end of the game wins.Evolving from older bat-and-ball games, an early form of baseball was being played in England by the mid-18th century   more
3 votes
0 comments
Baseball - Voter Comments
No Comments
Vote & Comment
3

Association football, more commonly known as football or soccer, is a sport played between two teams of eleven players with a spherical ball. It is played by 250 million players in over 200 countries, making it the world's most popular sport. The ga... me is played on a rectangular field with a goal at each end. The object of the game is to score by getting the ball into the opposing goal.The goalkeepers are the only players allowed to touch the ball with their hands or arms while it is in play and then only in their penalty area. Outfield players mostly use their feet to strike or pass the ball, but may use their head or torso to strike the ball instead. The team that scores the most goals by the end of the match wins. If the score is level at the end of the game, either a draw is declared or the game goes into extra time and/or a penalty shootout depending on the format of the competition. The Laws of the Game were originally codified in England by The Football Association in 1863. Association football is governed internationally by the International Federation of Association Football which organises a World Cup every four years   more
3 votes
0 comments
Football/Soccer - Voter Comments
No Comments
Vote & Comment
4

American football is a sport played by two teams of eleven players on a rectangular field 120 yards long by 53.33 yards wide with goalposts at each end. The offense attempts to advance an oval ball down the field by running with or passing it. They ... must advance it at least ten yards in four downs to receive a new set of four downs and continue the drive; if not, they turn over the football to the opposing team. Most points are scored by advancing the ball into the opposing team's end zone for a touchdown or kicking the ball through the opponent's goalposts for a field goal. The team with the most points at the end of a game wins.American football evolved in the United States, originating from the sport of rugby football. The first game of American football was played on November 6, 1869, between two college teams, Rutgers and Princeton, under rules resembling rugby and soccer. A set of rule changes drawn up from 1880 onward by Walter Camp, the "Father of American Football," established the snap, eleven-player teams and the concept of downs, and later rule changes legalized the forward pass, created the neutral zone, and specified the size and shape of the football   more
2 votes
0 comments
American football - Voter Comments
No Comments
Vote & Comment
5

Basketball is a sport played by two teams of five players on a rectangular court. The objective is to shoot a ball through a hoop 18 inches in diameter and 10 feet high mounted to a backboard at each end. Basketball is one of the world's most popula... r and widely viewed sports.A team can score a field goal by shooting the ball through the basket during regular play. A field goal scores two points for the shooting team if a player is touching or closer to the basket than the three-point line, and three points if the player is behind the three-point line. The team with the most points at the end of the game wins, but additional time may be issued when the game ends with a draw. The ball can be advanced on the court by bouncing it while walking or running or throwing it to a team mate. It is a violation to move without dribbling the ball, to carry it, or to hold the ball with both hands then resume dribbling.Violations are called "fouls". A personal foul is penalized, and a free throw is usually awarded to an offensive player if he is fouled while shooting the ball   more
1 vote
0 comments
Basketball - Voter Comments
No Comments
Vote & Comment
6

Golf is a precision club and ball sport in which competing players use many types of clubs to hit balls into a series of holes on a course using the fewest number of strokes. Golf is defined, in the rules of golf, as "playing a ball with a club from...  the teeing ground into the hole by a stroke or successive strokes in accordance with the Rules."It is one of the few ball games that do not require a standardized playing area. Instead, the game is played on a course, in general consisting of an arranged progression of either nine or 18 holes. Each hole on the course must contain a tee box to start from, and a putting green containing the actual hole. There are various other standardized forms of terrain in between, such as the fairway, rough, and hazards, but each hole on a course, and indeed among virtually all courses, is unique in its specific layout and arrangement.Golf competition is generally played for the lowest number of strokes by an individual, known simply as stroke play, or the lowest score on the most individual holes during a complete round by an individual or team, known as match play   more
0 votes
0 comments
Golf - Voter Comments
No Comments
Vote & Comment
7

Ice hockey is a team sport played on ice in which two teams of skaters use sticks to shoot a hard rubber hockey puck into their opponent's net to score points. In some countries such as Canada, the United States, and some European countries such as ... Latvia and Sweden, it is often known simply as "hockey"; the name "ice hockey" is more used in countries where "hockey" generally refers to field hockey or both sports are almost as popular. Ice hockey teams usually consists of four lines of three forwards, three pairs of defencemen, and two goalies. Five members of each team skate up and down the ice trying to take the puck and score a goal against the opposing team. Each team has a goaltender who tries to stop the puck from going into the goal.A fast-paced physical sport, hockey is most popular in areas of North America and Europe. In North America, the National Hockey League is the highest level for men's hockey and the most popular. Ice hockey is the official national winter sport of Canada, where the game enjoys immense popularity. Worldwide, there are ice hockey federations in 73 countries   more
0 votes
0 comments
Ice Hockey - Voter Comments
No Comments
Vote & Comment
8

Tennis is a sport people play individually against a single opponent or between two teams of two players each. Each player uses a racquet that is strung with cord to strike a hollow rubber ball covered with felt over or around a net and into the opp... onent's court. The object of the game is to play the ball in such a way that the opponent is not able to play a good return.Tennis is an Olympic sport and is played at all levels of society and at all ages. The sport can be played by anyone who can hold a racquet, including wheelchair users. The modern game of tennis originated in Birmingham, England, in the late 19th century as "lawn tennis". It had close connections both to various field games such as croquet and bowls as well as to the older racquet sport of real tennis. During most of the 19th-century in fact, the term "tennis" referred to real tennis, not lawn tennis: for example, in Disraeli's novel Sybil, Lord Eugene De Vere announces that he will "go down to Hampton Court and play tennis."The rules of tennis have changed little since the 1890s   more
0 votes
0 comments
Tennis - Voter Comments
No Comments
Vote & Comment
Leave a comment...
(Maximum 900 words)