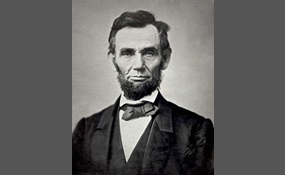 If you could meet one president for 10 minutes, who would you choose?

George Washington was the first President of the United States, the Commander-in-Chief of the Continental Army during the American Revolutionary War, and one of the Founding Fathers of the United States. He presided over the convention that drafted ... the United States Constitution, which replaced the Articles of Confederation and remains the supreme law of the land.Washington was unanimously elected President by the electors in both the 1788–1789 and 1792 elections. He oversaw the creation of a strong, well-financed national government that maintained neutrality in the wars raging in Europe, suppressed rebellion, and won acceptance among Americans of all types. Washington established many forms in government still used today, such as the cabinet system and inaugural address. His retirement after two terms and the peaceful transition from his presidency to that of John Adams established a tradition that continued up until Franklin D. Roosevelt was elected to a third term. Washington has been widely hailed as the "father of his country" even during his lifetime   more
7 votes
2 comments
George Washington - Voter Comments

John Fitzgerald Kennedy (May 29, 1917 – November 22, 1963), also referred to as John F. Kennedy, JFK, John Kennedy or Jack Kennedy, was the 35th President of the United States. He served from 1961 until his assassination in 1963. Major events during...  his presidency include the Bay of Pigs Invasion, the Cuban Missile Crisis, the building of the Berlin Wall, the Space Race, the American Civil Rights Movement and early events of the Vietnam War.John F. Kennedy was assassinated on November 22, 1963 in Dallas, Texas, United States. Lee Harvey Oswald was charged with the crime, but was himself murdered two days later by Jack Ruby before Oswald could be put on trial. The Warren Commission concluded that Oswald had acted alone in killing the president. However, the House Select Committee on Assassinations concluded in 1979 that there may have been a conspiracy. For the public at large, the entire subject remains controversial and shrouded in mystery with multiple allegation theories. The assassination itself proved to be a defining moment in U.S. History due to its traumatic impact on the psycheof the nation and its ensuing political fallout; a historical falloutthat influenced, and continues to influence, the temperament ofAmerican society. President Kennedy is now regarded as an icon ofAmerican hopes and aspirations to every new generation of Americans   more
4 votes
0 comments
John F. Kennedy - Voter Comments
No Comments
Vote & Comment
4

Abraham Lincoln was the 16th president of the United States, serving from March 1861 until his assassination in April 1865. Lincoln led the United States through its Civil War—its bloodiest war and its greatest moral, constitutional and political cr... isis. In doing so, he preserved the Union, abolished slavery, strengthened the federal government, and modernized the economy.Reared in a poor family on the western frontier, Lincoln was a self-educated lawyer in Illinois, a Whig Party leader, state legislator during the 1830s. Lincoln was elected to Congress in 1846, where he promoted rapid modernization of the economy through banks, tariffs, and railroads. He had originally agreed not to run for a second term and his opposition to the Mexican–American War was unpopular among the voters. He returned to Springfield and concentrated on his successful law practice throughout central Illinois. He returned to politics in 1854, and was a leader in building up the new Republican Party, which was had a statewide majority. After a series of highly publicized debates in 1858, during which Lincoln spoke out against the expansion of slavery, he lost the U.S   more
3 votes
0 comments
Abraham Lincoln - Voter Comments
No Comments
Vote & Comment
5

Barack Hussein Obama II (/bəˈrɑːk huːˈseɪn oʊˈbɑːmə/; born August 4, 1961) is the 44th and current President of the United States. He is the first African American to hold the office. Obama served as a U.S. Senator representing the state of Illinois...  from January 2005 to November 2008, when he resigned following his victory in the 2008 presidential election.Born in Honolulu, Hawaii, Obama is a graduate of Columbia University and Harvard Law School, where he was the president of the Harvard Law Review. He was a community organizer in Chicago before earning his law degree. He worked as a civil rights attorney in Chicago and taught constitutional law at the University of Chicago Law School from 1992 to 2004. He served three terms representing the 13th District in the Illinois Senate from 1997 to 2004   more
3 votes
1 comment
Barack Obama - Voter Comments

Franklin Delano Roosevelt, commonly known by his initials FDR, was an American statesman and political leader who served as the 32nd President of the United States. A Democrat, he was elected four times and served from March 1933 to his death in Apr... il 1945. He was a central figure in world events during the mid-20th century, leading the United States during a time of worldwide economic depression and total war. A dominant leader of the Democratic Party, he built a New Deal Coalition that realigned American politics after 1932, as his New Deal domestic policies defined American liberalism for the middle third of the 20th century.Roosevelt defeated incumbent Republican Herbert Hoover in November 1932, at the depth of the Great Depression. Energized by his personal victory over polio, FDR used his persistent optimism and activism to renew the national spirit. Assisted by key aide Harry Hopkins, he worked closely with British Prime Minister Winston Churchill and Soviet leader Joseph Stalin in leading the Allies against Nazi Germany, Fascist Italy and Imperial Japan in World War II   more
1 vote
0 comments
Franklin D. Roosevelt - Voter Comments
No Comments
Vote & Comment
Leave a comment...
(Maximum 900 words)