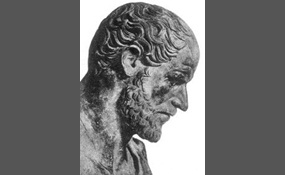 If you could meet someone from history who would it be?

Leonardo di ser Piero da Vinci, April 15, 1452 – May 2, 1519) was an Italian polymath, being a scientist, mathematician, engineer, inventor, anatomist, painter, sculptor, architect, botanist, musician and writer. Leonardo has often been described as...  the archetype of the "Renaissance man", a man whose "unquenchable curiosity" was equalled only by his powers of invention. He is widely considered to be one of the greatest painters of all time and perhaps the most diversely talented person ever to have lived. Helen Gardner says "The scope and depth of his interests were without precedent...His mind and personality seem to us superhuman, the man himself mysterious and remote".     Born as the illegitimate son of a notary, Piero da Vinci, and a peasant woman, Caterina, at Vinci in the region of Florence, Leonardo was educated in the studio of the renowned Florentine painter, Verrocchio. Much of his earlier working life was spent in the service of Ludovico il Moro in Milan. He later worked in Rome, Bologna and Venice and spent his last years in France, at the home awarded him by King François I.     Leonardo was and is renowned primarily as a painter. Two of his works, the Mona Lisa and The Last Supper, are the most famous, most reproduced and most parodied portrait and religious painting of all time, their fame approached only by Michelangelo's Creation of Adam   more
2 votes
0 comments
Leonardo da Vinci - Voter Comments
No Comments
Vote & Comment
5

Sir Winston Leonard Spencer-Churchill, KG, OM, CH, TD, DL, FRS, RA was a British politician who was the Prime Minister of the United Kingdom from 1940 to 1945 and again from 1951 to 1955. Widely regarded as one of the greatest wartime leaders of the...  20th century, Churchill was also an officer in the British Army, a historian, a writer, and an artist. He is the only British Prime Minister to have won the Nobel Prize in Literature, and was the first person to be made an honorary citizen of the United States.Churchill was born into the aristocratic family of the Dukes of Marlborough, a branch of the Spencer family. His father, Lord Randolph Churchill, was a charismatic politician who served as Chancellor of the Exchequer; his mother, Jennie Jerome, was an American socialite. As a young army officer, he saw action in British India, the Sudan, and the Second Boer War. He gained fame as a war correspondent and wrote books about his campaigns.At the forefront of politics for fifty years, he held many political and cabinet positions   more
2 votes
0 comments
Winston Churchill - Voter Comments
No Comments
Vote & Comment
6

Depends on conditions. Do I get to know extra language? How much can we talk? What forces that person to talk with me?

1 vote
0 comments
Depends on conditions. Do I get to know extra language? How much can we talk? What forces that person to talk with me? - Voter Comments
No Comments
Vote & Comment
7

Sir Isaac Newton PRS MP was an English physicist and mathematician who is widely recognised as one of the most influential scientists of all time and as a key figure in the scientific revolution. His book Philosophiæ Naturalis Principia Mathematica,...  first published in 1687, laid the foundations for classical mechanics. Newton also made seminal contributions to optics and shares credit with Gottfried Leibniz for the invention of calculus. Newton's Principia formulated the laws of motion and universal gravitation, which dominated scientists' view of the physical universe for the next three centuries. By deriving Kepler's laws of planetary motion from his mathematical description of gravity, and then using the same principles to account for the trajectories of comets, the tides, the precession of the equinoxes, and other phenomena, Newton removed the last doubts about the validity of the heliocentric model of the cosmos. This work also demonstrated that the motion of objects on Earth and of celestial bodies could be described by the same principles   more
1 vote
1 comment
Isaac Newton - Voter Comments

Galileo Galilei, often known mononymously as Galileo, was an Italian physicist, mathematician, engineer, astronomer, and philosopher who played a major role in the scientific revolution. His achievements include improvements to the telescope and con... sequent astronomical observations and support for Copernicanism. Galileo has been called the "father of modern observational astronomy", the "father of modern physics", the "father of science", and "the Father of Modern Science".His contributions to observational astronomy include the telescopic confirmation of the phases of Venus, the discovery of the four largest satellites of Jupiter, and the observation and analysis of sunspots. Galileo also worked in applied science and technology, inventing an improved military compass and other instruments.Galileo's championing of heliocentrism was controversial within his lifetime, when most subscribed to either geocentrism or the Tychonic system. He met with opposition from astronomers, who doubted heliocentrism due to the absence of an observed stellar parallax   more
0 votes
0 comments
Galileo Galilei - Voter Comments
No Comments
Vote & Comment
16

Marilyn Monroe (born Norma Jeane Mortenson; June 1, 1926 – August 5, 1962) was an American actress, model, and singer, who became a major sex symbol, starring in a number of commercially successful motion pictures during the 1950s and early 1960s. A... fter spending much of her childhood in foster homes, Monroe began a career as a model, which led to a film contract in 1946 with Twentieth Century-Fox   more
0 votes
0 comments
Marilyn Monroe - Voter Comments
No Comments
Vote & Comment
Leave a comment...
(Maximum 900 words)

PinValentine says2014-07-07T22:49:21.7906239-05:00
Report Post
I am glad you posted him. He is much more than the mind behind an early concept of the tank. There was so much more to him personally. Brilliant artist, genius, inventor, he studied anatomy when it was illegal, Created fantastic characters, was possibly gay, or even transgender, and had so many secrets. I love secrets. It is true that he didn't invent half of what is accredited to him, but he did improve on the designs.