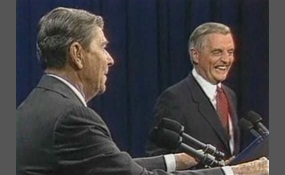 If you could redo the 1984 election, who would you vote for?

Ronald Wilson Reagan was the 40th President of the United States. Prior to his presidency, he served as the 33rd Governor of California, and was a radio, film and television actor.Born in Tampico, Illinois, and raised in Dixon, Reagan was educated a... t Eureka College, earning a Bachelor of Arts degree in economics and sociology. After graduating, Reagan moved first to Iowa to work as a radio broadcaster and then, in 1937, to Los Angeles where he began a career as an actor, first in films and later television. Some of his most notable films include Knute Rockne, All American, Kings Row, and Bedtime for Bonzo. Reagan served as President of the Screen Actors Guild and later as a spokesman for General Electric; his start in politics occurred during his work for GE. Originally a member of the Democratic Party, his positions began shifting rightward in the 1950s, and he switched to the Republican Party in 1962.After delivering a rousing speech in support of Barry Goldwater's presidential candidacy in 1964, he was persuaded to seek the California governorship, winning two years later and again in 1970. He was defeated in his run for the Republican presidential nomination in 1968 and in 1976, but won both the nomination and general election in 1980, defeating incumbent Jimmy Carter   more
8 votes
1 comment
Ronald Reagan (republican) - Voter Comments

Walter Frederick "Fritz" Mondale is an American Democratic Party politician who served as the 42nd Vice President of the United States under President Jimmy Carter, and as a United States Senator from Minnesota. He was the Democratic Party's preside... ntial candidate in the United States presidential election of 1984. As of 2014, he is the second most senior of the five living former vice presidents, having been retired from the position for well over three decades.Mondale was born in Ceylon, Minnesota, and graduated from the University of Minnesota in 1951. He then served in the U.S. Army in the Korean War before earning a law degree in 1956. He married Joan Adams in 1955. Working as a lawyer in Minneapolis, Mondale was elected to the position of attorney general in 1960. He was appointed U.S. Senator in late 1964 as a member of the Democratic Party upon the resignation of Hubert Humphrey, and held that post until 1976. In the Senate, he supported fair housing, tax reform, and the desegregation of schools. He opposed United States involvement in the Vietnam War.In 1976 Carter, the Democratic presidential nominee, chose Mondale as his vice presidential running mate in the forthcoming election. The Carter/Mondale ticket defeated incumbent president Gerald Ford and his Vice Presidential running mate, Bob Dole. Carter and Mondale's time in office was marred by a worsening economy, and although both were renominated by the Democratic Party, they lost the 1980 election to Republicans Ronald Reagan and George H.W. Bush   more
3 votes
1 comment
Walter Mondale (democrat) - Voter Comments