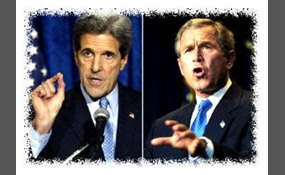 If you could redo the 2004 election, who would you vote for?

George Walker Bush is an American politician and businessman who served as the 43rd President of the United States of America from 2001 to 2009 and the 46th Governor of Texas from 1995 to 2000. The eldest son of Barbara and George H. W. Bush, he was...  born in New Haven, Connecticut. After graduating from Yale University in 1968 and Harvard Business School in 1975, Bush worked in oil businesses. He married Laura Welch in 1977 and ran unsuccessfully for the House of Representatives shortly thereafter. He later co-owned the Texas Rangers baseball team before defeating Ann Richards in the 1994 Texas gubernatorial election. Bush was elected president in 2000 after a close and controversial election, becoming the fourth president to be elected while receiving fewer popular votes nationwide than his opponent. Bush is the second president to have been the son of a former president, the first being John Quincy Adams. He is also the brother of Jeb Bush, former Governor of Florida.Eight months into Bush's first term as president, the September 11, 2001 terrorist attacks occurred. In response, Bush announced the War on Terror, an international military campaign which included the war in Afghanistan launched in 2001 and the war in Iraq launched in 2003. In addition to national security issues, Bush also promoted policies on the economy, health care, education, social security reform, and amending the Constitution to disallow same-sex marriage. He signed into law broad tax cuts, the PATRIOT Act, the No Child Left Behind Act, the Partial-Birth Abortion Ban Act, Medicare prescription drug benefits for seniors, and funding for the AIDS relief program known as PEPFAR. Bush announced the U.S. would not implement the Kyoto Protocol on global warming that had been negotiated by the Clinton Administration in 1997, and agreed to by 178 other countries, but never ratified by the U.S. Senate. His tenure saw national debates on immigration, Social Security, electronic surveillance, and enhanced interrogation techniques   more
5 votes
0 comments
George W. Bush (republican) - Voter Comments
No Comments
Vote & Comment
2

John Forbes Kerry is an American politician who is the 68th and current United States Secretary of State. He has served in the United States Senate, and was chairman of the Senate Foreign Relations Committee. Kerry was the candidate of the Democrati... c Party in the 2004 presidential election but lost to George W. Bush.The son of an Army Air Corps veteran, Kerry was born in Aurora, Colorado. He attended boarding school in Massachusetts and New Hampshire and went on to graduate from Yale University class of 1966, where he majored in political science and became a member of the Skull and Bones secret society. He enlisted in the Naval Reserve in 1966, and during 1968–1969 served an abbreviated four-month tour of duty in South Vietnam as officer-in-charge of a Swift Boat. For that service, he was awarded combat medals that include the Silver Star, Bronze Star, and three Purple Hearts. Securing an early return to the United States, Kerry joined the Vietnam Veterans Against the War in which he served as a nationally recognized spokesman and as an outspoken opponent of the Vietnam War. He appeared before the Senate Committee on Foreign Affairs where he deemed United States war policy in Vietnam to be the cause of "war crimes.   more
3 votes
0 comments
John Kerry (democrat) - Voter Comments
No Comments
Vote & Comment
3

Michael J. Badnarik is an American software engineer, political figure, and former radio talk show host. He was the Libertarian Party nominee for President of the United States in the 2004 elections, and placed fourth in the race, behind independent...  candidate Ralph Nader. Two years later he ran as a Libertarian Party candidate in the 2006 congressional elections for Texas's 10th congressional district seat near Austin. In a three candidate field, Badnarik came in third, receiving 7,603 votes for 4.3% of the vote   more
0 votes
0 comments
Michael Badnarik (libertarian) - Voter Comments
No Comments
Vote & Comment
Leave a comment...
(Maximum 900 words)