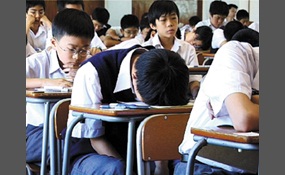 If you were to remove a common subject in school, what would it be?

Basically, I am wondering what people think are useless subjects. What subjects are not needed and have a better alternative the time available.

A second language. I almost think this is seperate from english, if english is a second language, because of how popular english is.
10 votes
0 comments
Second Language - Voter Comments
No Comments
Vote & Comment
2

All subjects are important and could possibly help a kid.
5 votes
0 comments
No Subject - Voter Comments
No Comments
Vote & Comment
3

The focus of this article is on literature in the English language from anywhere, not just the literature of England, so that it includes writers from Scotland, the whole of Ireland, Wales, as well as literature in English from former British coloni... es, including the US. However, up until the early 19th century, it deals with the literature written in English of Britain and Ireland.English literature is generally seen as beginning with the epic poem Beowulf, that dates from between the 8th to the 11th centuries, the most famous work in Old English, which has achieved national epic status in England, despite being set in Scandinavia. The next important landmark is the works of the poet Geoffrey Chaucer especially The Canterbury Tales. Then during The Renaissance, especially the late 16th and early 17th centuries, major drama and poetry was written by William Shakespeare, Ben Jonson, John Donne and many others. Another great poet, from later in the 17th century, was John Milton author of the epic poem Paradise Lost   more
4 votes
0 comments
English Literature - Voter Comments
No Comments
Vote & Comment
4

History is the study of the past, particularly how it relates to humans. It is an umbrella term that relates to past events as well as the memory, discovery, collection, organization, presentation, and interpretation of information about these event... s. Scholars who write about history are called historians. Events occurring prior to written record are considered prehistory.History can also refer to the academic discipline which uses a narrative to examine and analyse a sequence of past events, and objectively determine the patterns of cause and effect that determine them. Historians sometimes debate the nature of history and its usefulness by discussing the study of the discipline as an end in itself and as a way of providing "perspective" on the problems of the present.Stories common to a particular culture, but not supported by external sources are usually classified as cultural heritage or legends, because they do not support the "disinterested investigation" required of the discipline of history   more
1 vote
0 comments
History - Voter Comments
No Comments
Vote & Comment
9

Physics is the natural science that involves the study of matter and its motion through space and time, along with related concepts such as energy and force. More broadly, it is the general analysis of nature, conducted in order to understand how th... e universe behaves.Physics is one of the oldest academic disciplines, perhaps the oldest through its inclusion of astronomy. Over the last two millennia, physics was a part of natural philosophy along with chemistry, certain branches of mathematics, and biology, but during the Scientific Revolution in the 17th century, the natural sciences emerged as unique research programs in their own right. Physics intersects with many interdisciplinary areas of research, such as biophysics and quantum chemistry, and the boundaries of physics are not rigidly defined. New ideas in physics often explain the fundamental mechanisms of other sciences while opening new avenues of research in areas such as mathematics and philosophy.Physics also makes significant contributions through advances in new technologies that arise from theoretical breakthroughs   more
0 votes
0 comments
Physics - Voter Comments
No Comments
Vote & Comment
10

English is a West Germanic language that was first spoken in early medieval England and is now a global lingua franca. It is the national language of numerous sovereign states, including the United Kingdom, the United States, Canada, Australia, Irel... and, New Zealand and a number of Caribbean nations; it is an official language of almost 60 sovereign states. It is the third-most-common native language in the world, after Mandarin and Spanish. It is widely learned as a second language and is an official language of the European Union, many Commonwealth countries and the United Nations, as well as in many world organisations.English arose in the Anglo-Saxon kingdoms of England and what is now southeast Scotland. Following the extensive influence of England, Great Britain, and the United Kingdom from the 17th to mid-20th centuries through the British Empire, it has been widely propagated around the world. Through the spread of English literature, world media networks such as the BBC, the American film and television industry as well as technology, English has become the leading language of international discourse and the lingua franca in many regions   more
0 votes
0 comments
English - Voter Comments
No Comments
Vote & Comment
13

Trigonometry is a branch of mathematics that studies relationships involving lengths and angles of triangles. The field emerged during the 3rd century BC from applications of geometry to astronomical studies.The 3rd-century astronomers first noted t... hat the lengths of the sides of a right-angle triangle and the angles between those sides have fixed relationships: that is, if at least the length of one side and the value of one angle is known, then all other angles and lengths can be determined algorithmically. These calculations soon came to be defined as the trigonometric functions and today are pervasive in both pure and applied mathematics: fundamental methods of analysis such as the Fourier transform, for example, or the wave equation, use trigonometric functions to understand cyclical phenomena across many applications in fields as diverse as physics, mechanical and electrical engineering, music and acoustics, astronomy, ecology, and biology. Trigonometry is also the foundation of surveying.Trigonometry is most simply associated with planar right-angle triangles   more
0 votes
0 comments
Trigonometry - Voter Comments
No Comments
Vote & Comment
Leave a comment...
(Maximum 900 words)