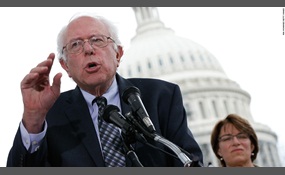 In an election between Bernie Sanders and Chris Christie who would you support?

Bernard "Bernie" Sanders is an American politician and the junior United States Senator from Vermont. Before serving in the Senate, he represented Vermont's at-large congressional district in the United States House of Representatives and served as ... mayor of Burlington, the largest city in Vermont. Sanders is a self-described democratic socialist, and has praised Scandinavian-style social democracy.Sanders runs for office as an independent but caucuses with the Democratic Party and is counted as a Democrat for purposes of committee assignments. He was the only independent member of the House during most of his service and is the longest-serving independent in U.S. Congressional history.In an interview with The Nation on March 6, 2014, Sanders stated that he is "prepared to run for President of the United States" in 2016   more
18 votes
4 comments
Bernie Sanders - Voter Comments

stellajack says2015-07-22T08:53:57.9557733-05:00
Report Post
Bernie has been fighting for the poor and working class for decades. He probably labeled himself a Socialist years ago because he never thought he would be running for President and I am not afraid that we will become a Socialist country if he wins. We have to head in the direction of Socialism in order to get back to the middle where I would hope we would find human decency; capitalism that isn't corrupt. I think it is worse to live in a country where only the wealthy have a voice. I have listened to Bernie address this problem for years. Leave a comment (optional)

imabench says2015-07-24T17:57:08.0059516-05:00
Report Post
I have my reservations about Bernie but Christie flat out is against marijuana even for medical purposes and said if elected he would crack down on it, and thats enough of a red flag for me to vote for Bernie
Vote & Comment
2

Christopher James "Chris" Christie is the 55th Governor of New Jersey and a leading member of the Republican Party.Born in Newark, Christie became interested in politics at an early age, and volunteered for the gubernatorial campaign of Republican T... om Kean in 1977. A 1984 graduate of the University of Delaware, he earned a J.D. At Seton Hall University School of Law. Christie joined a Cranford law firm in 1987, where he became a partner in 1993, and continued practicing until 2002. He was elected as a county legislator in Morris County, serving from 1995 to 1998, during which time he generally pushed for lower taxes and lower spending. By 2002, Christie had campaigned for Presidents George H.W. Bush and George W. Bush; the latter appointed him as United States Attorney for New Jersey, a position he held from 2002 to 2008. In that position, he emphasized prosecutions of political corruption, and also obtained convictions for sexual slavery, arms trafficking, racketeering by gangs, as well as other federal crimes.In January 2009, Christie declared his candidacy for Governor of New Jersey   more
7 votes
0 comments
Chris Christie - Voter Comments
No Comments
Vote & Comment
3