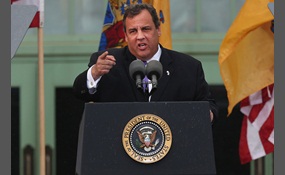 In an election between Chris Christie and Elizabeth Warren who would you support?

Christopher James "Chris" Christie is the 55th Governor of New Jersey and a leading member of the Republican Party.Born in Newark, Christie became interested in politics at an early age, and volunteered for the gubernatorial campaign of Republican T... om Kean in 1977. A 1984 graduate of the University of Delaware, he earned a J.D. At Seton Hall University School of Law. Christie joined a Cranford law firm in 1987, where he became a partner in 1993, and continued practicing until 2002.He was elected as a county legislator in Morris County, serving from 1995 to 1998, during which time he generally pushed for lower taxes and lower spending. By 2002, Christie had campaigned for Presidents George H.W. Bush and George W. Bush; the latter appointed him as United States Attorney for New Jersey, a position he held from 2002 to 2008. In that position, he emphasized prosecutions of political corruption, and also obtained convictions for sexual slavery, arms trafficking, racketeering by gangs, as well as other federal crimes.In January 2009, Christie declared his candidacy for Governor of New Jersey   more
5 votes
0 comments
Chris Christie - Voter Comments
No Comments
Vote & Comment
2

Elizabeth Ann Warren is an American academic and politician, who is the senior United States Senator from Massachusetts and a member of the Democratic Party. She was previously a Harvard Law School professor specializing in bankruptcy law. Warren is...  an active consumer protection advocate whose work led to the conception and establishment of the U.S. Consumer Financial Protection Bureau. She has written a number of academic and popular works, and is a frequent subject of media interviews regarding the American economy and personal finance.In the wake of the 2008 financial crisis, Warren served as chair of the Congressional Oversight Panel created to oversee the Troubled Asset Relief Program. She later served as Assistant to the President and Special Advisor to the Secretary of the Treasury for the Consumer Financial Protection Bureau under President Barack Obama. In the late 2000s, she was recognized by publications such as the National Law Journal and the Time 100 as an increasingly influential public policy figure.In September 2011, Warren announced her candidacy for the U.S. Senate, challenging Republican incumbent Scott Brown   more
3 votes
1 comment
Elizabeth Warren - Voter Comments

discomfiting says2014-07-22T12:54:05.8383672-05:00
Report Post
Christie raised taxes on the poor by cutting credit programs and he doesn't care about the people which is why 1.) he misused sandy funds 2.) took several years to get a simply bill into the houses 3.) is a bully 4.) ignores what the public wants in terms of social issues 5.) is a social authoritarian and a freedom hater & a fascist. Elizabeth Warren can relate to people, she is a commoner and worked for what she has; she is an intelligent woman who strikes fear into the hearts of bankers and greedy capitalist monsters; she's a freedom fighter & the best option for America.
Vote & Comment
3

The_Immortal_Emris says2014-07-23T14:34:17.2111185-05:00
Report Post
There is only one reason I don't want Warren to run. She's so vital where she is already. I'd love to see her appointed to a cabinet position. Possibly secretary of education.
Privacy Policy | Terms of Use
Sitemap | View Desktop Version
©2020 Debate.org. All rights reserved.