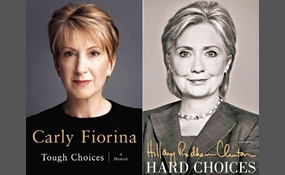 In an election between Hillary Clinton and Carly Fiorina who would you support?

Carly Fiorina is an American former business executive and was the Republican nominee for the United States Senate from California in 2010. Fiorina served as chief executive officer of Hewlett-Packard from 1999 to 2005 and previously was an executiv... e at AT&T and its equipment and technology spinoff, Lucent.Fiorina was considered one of the most powerful women in business during her tenure at Lucent and Hewlett-Packard. While she was chief executive at HP, the company weathered the collapse of the dot-com bubble, although the stock lost half of its value throughout her tenure. In 2002, the company completed a contentious merger with rival computer company Compaq, which made HP the world's largest personal computer manufacturer. In 2005, Fiorina was forced to resign as chief executive officer and chairman of HP following "differences [with the board of directors] about how to execute HP's strategy."Fiorina served as an advisor to Republican John McCain's 2008 presidential campaign. She was the Republican nominee for the United States Senate from California in 2010, losing to incumbent Democratic Senator Barbara Boxer. She is actively considering running for President in 2016   more
13 votes
3 comments
Carly Fiorina - Voter Comments

Squirrelnuts57 says2015-04-30T10:55:11.7240387-05:00
Report Post
Not to offend, but voting for Hillary Clinton would be idiotic. She was in charge of what we did in Benghazi and when it was attacked and we lost a senator, she did jack squat. If we were attacked by another country or terrorist group, i fear she'd just repeat Benghazi.

Hillary Diane Rodham Clinton is a former United States Secretary of State, U.S. Senator, and First Lady of the United States. From 2009 to 2013, she was the 67th Secretary of State, serving under President Barack Obama. She previously represented Ne... w York in the U.S. Senate. Before that, as the wife of President Bill Clinton, she was First Lady from 1993 to 2001. In the 2008 election, Clinton was a leading candidate for the Democratic presidential nomination.A native of Illinois, Hillary Rodham was the first student commencement speaker at Wellesley College in 1969 and earned a J.D. From Yale Law School in 1973. After a brief stint as a Congressional legal counsel, she moved to Arkansas and married Bill Clinton in 1975. Rodham cofounded Arkansas Advocates for Children and Families in 1977. In 1978, she became the first female chair of the Legal Services Corporation, and in 1979, the first female partner at Rose Law Firm. The National Law Journal twice listed her as one of the hundred most influential lawyers in America. As First Lady of Arkansas from 1979 to 1981 and 1983 to 1992 with her husband as Governor, she led a task force that reformed Arkansas's education system   more
2 votes
0 comments
Hillary Rodham Clinton - Voter Comments
No Comments
Vote & Comment
Leave a comment...
(Maximum 900 words)