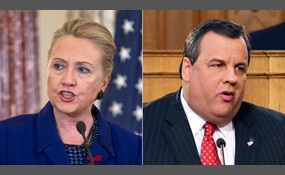 In an election between Hillary Clinton and Chris Christie who would you support?

Both these two seem likely candidates. Who would you support?

Christopher James "Chris" Christie is the 55th Governor of New Jersey, and a leading member of the Republican Party in the United States.A Newark native, Christie became interested in politics at an early age, and volunteered for the gubernatorial c... ampaign of Republican Tom Kean in 1977. Graduating from the University of Delaware, he then earned a J.D. Degree at Seton Hall Law School.Christie joined a Cranford, New Jersey law firm in 1987, where he became a partner in 1993, and continued practicing until 2002. Meanwhile, he was elected as a county legislator in Morris County, serving from 1995 to 1998 during which time he generally pushed for lower taxes and lower spending. By 2002, Christie had done campaign work for both presidents George H.W. Bush and George W. Bush; the latter appointed him United States Attorney for the District of New Jersey where he served from 2002 to 2008. In that position, he emphasized prosecutions of political corruption, and also obtained convictions for sexual slavery, arms trafficking, racketeering by gangs, and other federal crimes.In January 2009, Christie declared his candidacy for Governor of New Jersey. He won the Republican primary, and then defeated incumbent Governor Jon Corzine in the general election. Christie, who was seen as a possible candidate in the 2012 presidential election, declined to run, but he delivered the keynote address at the 2012 Republican National Convention. Chris Christie is widely viewed as a possible presidential candidate in 2016. In 2013 Christie won a landslide re-election, beating Democratic rival Barbara Buono   more
14 votes
3 comments
Chris Christie - Voter Comments

Hillary Diane Rodham Clinton is a former United States Secretary of State, U.S. Senator, and First Lady of the United States. She was the 67th Secretary of State from 2009 to 2013, serving under President Barack Obama. She previously represented New...  York in the U.S. Senate. Before that, as the wife of President Bill Clinton, she was First Lady from 1993 to 2001. Also, in the 2008 election, Clinton was a leading candidate for the Democratic presidential nomination.A native of Illinois, Hillary Rodham was the first student commencement speaker at Wellesley College in 1969. She then earned a J.D. From Yale Law School in 1973. Following a stint as a Congressional legal counsel, she moved to Arkansas in 1974 and married Bill Clinton in 1975. Rodham cofounded the Arkansas Advocates for Children and Families in 1977. Becoming the first female chair of the Legal Services Corporation in 1978, and the first female partner at Rose Law Firm in 1979, The National Law Journal listed her in 1988 and 1991 as one of the hundred most influential lawyers in America. As First Lady of Arkansas from 1979 to 1981 and 1983 to 1992 with husband Bill as Governor, she led a task force that reformed Arkansas's education system. During that time, she was on the board of Wal-Mart and several other corporations   more
7 votes
2 comments
Hillary Rodham Clinton - Voter Comments

SweetTea says2013-11-15T04:01:55.7210904-06:00
Report Post
I'm speechless. I like them both. And both are proven, capable leaders. I suppose one could argue that Clinton has a blemish with Benghazi. But Congress cut the State Dept. Budget. When you cut funds, everything suffers -- including security. Some might consider the fact that Christie once worked for Bernie Madoff to be a negative. Rumor has it, that was the deal-breaker that kept him off the GOP's national ticket in 2012. If the election were today, between these two, I couldn't decide!