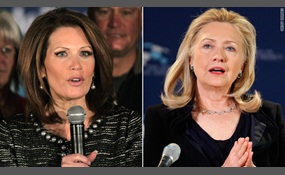 In an election between Hillary Clinton and Michele Bachmann who would you support?

Hillary Diane Rodham Clinton is a former United States Secretary of State, U.S. Senator, and First Lady of the United States. From 2009 to 2013, she was the 67th Secretary of State, serving under President Barack Obama. She previously represented Ne... w York in the U.S. Senate. Before that, as the wife of President Bill Clinton, she was First Lady from 1993 to 2001. In the 2008 election, Clinton was a leading candidate for the Democratic presidential nomination.A native of Illinois, Hillary Rodham was the first student commencement speaker at Wellesley College in 1969 and earned a J.D. From Yale Law School in 1973. After a brief stint as a Congressional legal counsel, she moved to Arkansas and married Bill Clinton in 1975. Rodham cofounded the Arkansas Advocates for Children and Families in 1977. In 1978, she became the first female chair of the Legal Services Corporation, and in 1979 the first female partner at Rose Law Firm. The National Law Journal twice listed her as one of the hundred most influential lawyers in America. As First Lady of Arkansas from 1979 to 1981 and 1983 to 1992 with husband Bill as Governor, she led a task force that reformed Arkansas's education system   more
6 votes
2 comments
Hillary Rodham Clinton - Voter Comments

Michele Marie Bachmann is an American Republican member of the United States House of Representatives, representing Minnesota's 6th congressional district, a post she has held since 2007. The district includes several of the northern suburbs of the ... Twin Cities, as well as St. Cloud. The district has recently expanded.She was a candidate for the Republican nomination in the 2012 U.S. presidential election, winning the Ames Straw Poll in August 2011 but dropping out in January 2012 after finishing in sixth place in the Iowa caucuses. Bachmann previously served in the Minnesota State Senate and is the first Republican woman to represent the state in Congress. She is a supporter of the Tea Party movement and a founder of the House Tea Party Caucus. Bachmann has been dubbed as the "Queen of the Tea Party".On May 29, 2013, Bachmann announced that she would not seek re-election to her Congressional seat in 2014   more
4 votes
0 comments
Michele Bachmann - Voter Comments
No Comments
Vote & Comment
Leave a comment...
(Maximum 900 words)