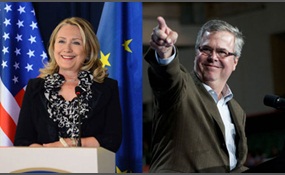 In an election between jeb bush and hillary clinton, who would you vote for?

The term third party is used in the United States for any and all political parties in the United States other than one of the two major parties. The term can also refer to independent politicians not affiliated with any party at all and to write-in...  candidates   more
13 votes
5 comments
Third party - Voter Comments

Hillary Diane Rodham Clinton is a former United States Secretary of State, U.S. Senator, and First Lady of the United States. From 2009 to 2013, she was the 67th Secretary of State, serving under President Barack Obama. She previously represented Ne... w York in the U.S. Senate. Before that, as the wife of President Bill Clinton, she was First Lady from 1993 to 2001. In the 2008 election, Clinton was a leading candidate for the Democratic presidential nomination.A native of Illinois, Hillary Rodham was the first student commencement speaker at Wellesley College in 1969 and earned a J.D. From Yale Law School in 1973. After a brief stint as a Congressional legal counsel, she moved to Arkansas and married Bill Clinton in 1975. Rodham cofounded the Arkansas Advocates for Children and Families in 1977. In 1978, she became the first female chair of the Legal Services Corporation, and in 1979 the first female partner at Rose Law Firm. The National Law Journal twice listed her as one of the hundred most influential lawyers in America. As First Lady of Arkansas from 1979 to 1981 and 1983 to 1992 with husband Bill as Governor, she led a task force that reformed Arkansas's education system. During that time, she was on the board of Wal-Mart and several other corporations   more
7 votes
5 comments
Hillary Rodham Clinton - Voter Comments

John Ellis "Jeb" Bush served as the 43rd Governor of Florida from 1999 to 2007. He is the second son of former President George H. W. Bush and former First Lady Barbara Bush, and is the younger brother of former President George W. Bush. Jeb Bush is...  the first and only Republican to serve two full four-year terms as Governor of Florida.Bush grew up in Houston, Texas. He attended the University of Texas, where he earned a degree in Latin American affairs. Following his father's successful run for Vice President in 1980, he moved to Florida. In 1986, Bush was named Florida's Secretary of Commerce, a position he held until resigning in 1988 to help his father's successful campaign for the Presidency.In 1994, Bush made his first run for office, narrowly losing the election for governor by less than two percentage points to the incumbent Lawton Chiles. Bush ran again in 1998 and beat Lieutenant Governor Buddy MacKay with 55 percent of the vote. He ran for reelection in 2002, and won with 56 percent, to become Florida's first two-term Republican Governor. During his eight years as governor, Bush was credited with initiating improvements in the economy, environment, and health care, as well as reforming the education system. He was also responsible for ending the Florida high speed rail initiative on his second day in office   more
2 votes
0 comments
Jeb Bush - Voter Comments
No Comments
Vote & Comment
Leave a comment...
(Maximum 900 words)

Jifpop09 says2014-04-12T16:59:56.2029166-05:00
Report Post
Unfortunately we don't have a better running candidate for the democratic party. Hillary is accused of not being liberal enough, and Jeb for not being conservative enough, lol. The republican party might like Hillary.

progressivedem22 says2014-04-12T20:01:43.8646212-05:00
Report Post
Who are the GOP's leading contenders, SpeckledEagle? Cruz, Huckabee, Paul, and Rubio -- a bunch of crazies who could never hope to win a general election? At least Jeb has some semblance of a chance. Even Robert Reich praised the guy in a recent FB post.
Privacy Policy | Terms of Use
Sitemap | View Desktop Version
©2021 Debate.org. All rights reserved.