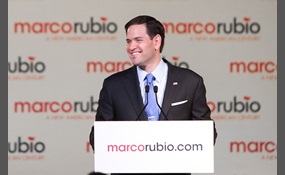 In an election between Marco Rubio and Bernie Sanders who would you support?

Marco Antonio Rubio is the junior United States Senator from Florida, serving since January 2011. A member of the Republican Party, he previously served as Speaker of the Florida House of Representatives.A Cuban American native of Miami, Florida, Ru... bio is a graduate of the University of Florida and the University of Miami Law School. In the late 1990s, he served as a City Commissioner for West Miami and was elected to the Florida House of Representatives in 2000, representing the 111th House district. He was elected Speaker in November 2006.Rubio announced a run for U.S. Senate in May 2009 after incumbent Republican Mel Martinez resigned. Initially trailing by double-digits against the incumbent Republican Governor Charlie Crist, Rubio eventually surpassed him in polling for the Republican nomination. Rubio won the Republican nomination after Crist opted instead to run with no party affiliation. In a three-way split against Crist and Democratic candidate Kendrick Meek, Rubio won the general election in November 2010 with 48.9 percent of the vote. He is one of three Latinos in the Senate   more
10 votes
2 comments
Marco Rubio - Voter Comments

Bernard "Bernie" Sanders is an American politician and the junior United States Senator from Vermont. Before serving in the Senate, he represented Vermont's at-large congressional district in the United States House of Representatives and served as ... mayor of Burlington, the largest city in Vermont. Sanders is a self-described democratic socialist, and has praised Scandinavian-style social democracy.Sanders runs for office as an independent but caucuses with the Democratic Party and is counted as a Democrat for purposes of committee assignments. He was the only independent member of the House during most of his service and is the longest-serving independent in U.S. Congressional history.In an interview with The Nation on March 6, 2014, Sanders stated that he is "prepared to run for President of the United States" in 2016   more
9 votes
0 comments
Bernie Sanders - Voter Comments
No Comments
Vote & Comment
3