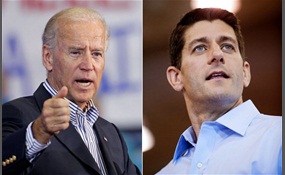 In an election between Paul Ryan and Joe Biden who would you support?

Joseph Robinette "Joe" Biden, Jr. Is the 47th and current Vice President of the United States, jointly elected with President Barack Obama. He is a member of the Democratic Party and was a United States Senator from Delaware from January 3, 1973, un... til his resignation on January 15, 2009, following his election to the Vice Presidency. In 2012, Biden was elected to a second term alongside Obama.Biden was born in Scranton, Pennsylvania, and lived there for ten years before moving to Delaware. He became an attorney in 1969, and was elected to the New Castle County council in 1970. Biden was first elected to the Senate in 1972 and became the sixth-youngest senator in U.S. history. He was re-elected to the Senate six times, and was the fourth most senior senator at the time of his resignation. Biden was a long-time member and former chairman of the Foreign Relations Committee. His strong advocacy helped bring about U.S. military assistance and intervention during the Bosnian War. He opposed the Gulf War in 1991. He voted in favor of the Iraq War Resolution in 2002, but later proposed resolutions to alter U.S. strategy there. He has also served as chairman of the Senate Judiciary Committee, dealing with issues related to drug policy, crime prevention, and civil liberties, and led creation of the Violent Crime Control and Law Enforcement Act and Violence Against Women Act. He chaired the Judiciary Committee during the contentious U.S. Supreme Court nominations of Robert Bork and Clarence Thomas   more
4 votes
1 comment
Joe Biden - Voter Comments

1Historygenius says2014-05-20T22:28:11.9284216-05:00
Report Post
@Lt. Harris I'm sorry but that is what automatically comes up for Paul Ryan, who I voted for in this poll. When you create a poll with an individual sometimes the info section will automatically give information based on the name you typed in. Also, I'm assuming people who know Paul Ryan know he is more than just some guy from a movie.

JohnMaynardKeynes says2014-05-25T00:10:42.4809026-05:00
Report Post
Paul Ryan is an Ayn Randian who claims at the same time to be a Christian, a compulsive liar, and a tool of the affluent and powerful. He would be an awful president. As clumsy as Biden is, he would, at the very least, maintain the status quo -- which is much better than the chaos a Ryan Administration would bring.
Privacy Policy | Terms of Use
Sitemap | View Desktop Version
©2021 Debate.org. All rights reserved.