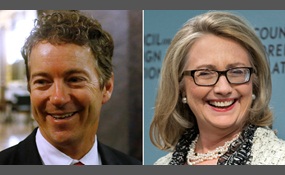 In an election between rand paul and hillary clinton, who would you vote for?

Randal Howard "Rand" Paul is the junior United States Senator for Kentucky. He is a member of the Republican Party and the son of former U.S. Representative and presidential candidate Ron Paul of Texas. He first received national attention in 2008 w... hen making political speeches on behalf of his father, who was campaigning for the Republican Party's nomination for president. During his father's final term in the house, he was the first United States senator to have served simultaneously with a parent in the United States House of Representatives.A graduate of the Duke University School of Medicine, Paul began practicing ophthalmology in Bowling Green, Kentucky in 1993 and established his own clinic in December 2007. He remained active in politics and founded Kentucky Taxpayers United in 1994, of which he is still chairman.In 2010, Paul ran as the Republican candidate for the United States Senate seat being vacated by retiring Senator Jim Bunning of Kentucky, defeating Kentucky Secretary of State Trey Grayson in the primary. He subsequently defeated Kentucky Attorney General Jack Conway in the general election. A member of the Tea Party movement, he supports term limits, a balanced budget amendment, the Read the Bills Act, and widespread reduction in federal spending and taxation. Unlike his more stridently isolationist, or "non-interventionist", father, Paul concedes a role for American armed forces abroad, including permanent foreign military bases. He has garnered attention for his positions, often clashing with both Republicans and Democrats   more
12 votes
1 comment
Rand Paul - Voter Comments

Hillary Diane Rodham Clinton is a former United States Secretary of State, U.S. Senator, and First Lady of the United States. From 2009 to 2013, she was the 67th Secretary of State, serving under President Barack Obama. She previously represented Ne... w York in the U.S. Senate. Before that, as the wife of President Bill Clinton, she was First Lady from 1993 to 2001. In the 2008 election, Clinton was a leading candidate for the Democratic presidential nomination.A native of Illinois, Hillary Rodham was the first student commencement speaker at Wellesley College in 1969 and earned a J.D. From Yale Law School in 1973. After a brief stint as a Congressional legal counsel, she moved to Arkansas and married Bill Clinton in 1975. Rodham cofounded the Arkansas Advocates for Children and Families in 1977. In 1978, she became the first female chair of the Legal Services Corporation, and in 1979 the first female partner at Rose Law Firm. The National Law Journal twice listed her as one of the hundred most influential lawyers in America. As First Lady of Arkansas from 1979 to 1981 and 1983 to 1992 with husband Bill as Governor, she led a task force that reformed Arkansas's education system. During that time, she was on the board of Wal-Mart and several other corporations   more
1 vote
1 comment
Hillary Rodham Clinton - Voter Comments