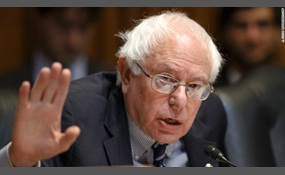 In an election between Scott Walker and Bernie Sanders who would you support?

Bernard "Bernie" Sanders is an American politician and the junior United States Senator from Vermont. Before serving in the Senate, he represented Vermont's at-large congressional district in the United States House of Representatives and served as ... mayor of Burlington, the largest city in Vermont. Sanders is a self-described democratic socialist, and has praised Scandinavian-style social democracy.Sanders runs for office as an independent but caucuses with the Democratic Party and is counted as a Democrat for purposes of committee assignments. He was the only independent member of the House during most of his service and is the longest-serving independent in U.S. Congressional history.In an interview with The Nation on March 6, 2014, Sanders stated that he is "prepared to run for President of the United States" in 2016   more
13 votes
2 comments
Bernie Sanders - Voter Comments

Scott Kevin Walker is an American Republican legislator and politician who is the 45th Governor of Wisconsin. He was first elected Governor in 2010 and was sworn in on January 3, 2011. Walker was re-elected to a second term on November 4, 2014.Born ... in Colorado Springs, Colorado, Walker attended Marquette University in Milwaukee but did not graduate. He started his career working for IBM before gaining a marketing job with the American Red Cross. At age 22, Walker lost a run for the Wisconsin State Assembly in a Milwaukee district in 1990, which is the only competitive election, which Walker has lost in his career to date. He won his next bid for the Assembly after moving to a more conservative district in Wauwatosa, and served four more terms in the Assembly. In 2002, after the resignation of Tom Ament as Executive of Milwaukee County, Walker won in a special election to fill the seat, winning the first of three terms serving as County Executive in Milwaukee County from 2002 to 2010.In his first run for Governor in 2006 he dropped out before the Republican primaries. Walker again ran for the governorship in 2010, winning in a three-person race in the Republican primary   more
7 votes
2 comments
Scott Walker - Voter Comments

doctorcsss says2015-05-11T08:16:36.3327659-05:00
Report Post
Scott Walker has transformed the economy of Wisconsin. He has also stood up to unions and won. He would be far more beneficial to America than a socialist like Sanders.

Lemmingburgh says2015-05-13T11:53:37.6252343-05:00
Report Post
@doctorsss: Norway and other Scandinavian countries have relatively Socialist states and are doing just dandy. And how, please, is that common sense?
Privacy Policy | Terms of Use
Sitemap | View Desktop Version
©2020 Debate.org. All rights reserved.