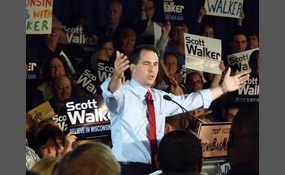 In an election between Scott Walker and Jerry Brown who would you support?

The two gubernatorial leaders for both parties.

Edmund Gerald "Jerry" Brown, Jr. Is an American politician who currently serves as the 39th Governor of California since 2011; he previously served as California's 34th Governor from 1975 to 1983. Both before and after his original two terms as Gove... rnor, Brown served in numerous state, local, and party positions. He was a member of the Los Angeles Community College District Board of Trustees, Secretary of State of California, chairman of the California Democratic Party, Mayor of Oakland and Attorney General of California.Brown sought the Democratic nominations for President of the United States in 1976, 1980, and 1992, and was the Democratic candidate for the United States Senate in California in 1982, but was unsuccessful in those attempts. He is the son of Pat Brown, the 32nd Governor of California. On October 7, 2013, he became the longest-serving governor in California history measured by cumulative service.As a consequence of the 28-year gap between his second and third terms, Brown has been both the sixth-youngest California governor and the oldest California governor in history   more
3 votes
0 comments
Jerry Brown - Voter Comments
No Comments
Vote & Comment
3