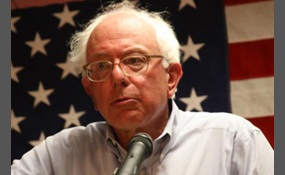 In an election between Ted Cruz and Bernie Sanders who would you support?

Rafael Edward "Ted" Cruz is the junior United States Senator from Texas. Elected in 2012, he is the first Cuban American or Latino to hold the office of US Senator from Texas. Cruz is a member of the Republican Party. He served as Solicitor General ... of Texas from 2003 to May 2008, after being appointed by Texas Attorney General Greg Abbott. Between 1999 and 2003, Cruz served as the director of the Office of Policy Planning at the Federal Trade Commission, an Associate Deputy Attorney General at the United States Department of Justice, and as Domestic Policy Advisor to U.S. President George W. Bush on the 2000 Bush-Cheney campaign. Cruz was also an Adjunct Professor of Law at the University of Texas School of Law in Austin, where he taught U.S. Supreme Court litigation, from 2004 to 2009.Cruz was the Republican nominee for the Senate seat vacated by fellow Republican Kay Bailey Hutchison. On July 31, 2012, he defeated Lieutenant Governor David Dewhurst in the Republican primary runoff, 57–43. Cruz defeated the Democrat, former state Representative Paul Sadler, in the general election held on November 6, 2012; he prevailed with 56–41 over Sadler   more
17 votes
3 comments
Ted Cruz - Voter Comments

Bernard "Bernie" Sanders is an American politician and the junior United States Senator from Vermont. Before serving in the Senate, he represented Vermont's at-large congressional district in the United States House of Representatives and served as ... mayor of Burlington, the largest city in Vermont. Sanders is a self-described democratic socialist, and has praised Scandinavian-style social democracy.Sanders runs for office as an independent but caucuses with the Democratic Party and is counted as a Democrat for purposes of committee assignments. He was the only independent member of the House during most of his service and is the longest-serving independent in U.S. Congressional history.In an interview with The Nation on March 6, 2014, Sanders stated that he is "prepared to run for President of the United States" in 2016   more
17 votes
2 comments
Bernie Sanders - Voter Comments

TBR says2015-05-14T18:17:53.0241667-05:00
Report Post
NelsonKnows - That statement is completely false. Do you like Paul? What if I said Paul wants to abandon all babies in the woods. If they survive on their own, they can join society when capable of toddling out under their own power?

NelsonKnows says2015-05-14T18:38:16.9117996-05:00
Report Post
TBR - please offer evidence as to why my statement is false and try to stay in the realm of reality. Why would you assume I like Paul, my statement was germain to Sanders. And, Abandoning ALL babies sounds like more of a Collectivist policy...Something Sanders might embrace because they aren't contributing to the collective. Furthermore, if you told me Paul said that, I'd ask for proof and call you a liar until you produced it. Sanders most definately does not believe in the right of personal & private property. BERNIE SANDERS is a DEMOCRATIC SOCIALIST, he believes the Gov. has dominion over property and the means of production, not the individual.

Stefy says2015-05-14T20:52:37.1555925-05:00
Report Post
Triangle.128k: Bernie Sanders is not a communist he is a social democrat (also called democratic socialist but far far different from pure socialism). Hes in favor of nothing more extreme than how they do things in the nordic countries. And you shouldn't exaggerate like that. Its spreading misinformation because its a different political ideology. Its like if I called Rand Paul an anarchist its just not true.