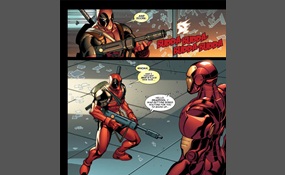 Deadpool is a fictional character, a mercenary and anti-hero appearing in comic books published by Marvel Comics. Created by artist Rob Liefeld and writer Fabian Nicieza, Deadpool first appeared in New Mutants #98.A disfigured and mentally unstable ... mercenary, Deadpool originally appeared as a villain in an issue of New Mutants, and later in issues of X-Force. The character has since starred in several ongoing series, and shares titles with other characters such as Cable. Also known as the "Merc with a Mouth," Deadpool is famous for his talkative nature and his tendency to "break the fourth wall", which is used by writers for humorous effect.Deadpool was ranked 182nd on Wizard magazine's list of the Top 200 Comic Book Characters of All Time, ranked 45th on Empire magazine's list of The 50 Greatest Comic Book Characters, and placed 31st on IGN's list of the Top 100 Comic Book Heroes. He was portrayed by Ryan Reynolds in 2009 film X-Men Origins: Wolverine   more
21 votes
6 comments
Deadpool - Voter Comments

Totodile says2014-05-11T17:49:15.3510990-05:00
Report Post
Deadpool is like hardcore man, is a good combat fighter and can fight without powers. Iron man is just some guy in a suit made out of metal that relies on technology and is powerless without a suit.
Vote & Comment
2

Adrian Petriw is the voice of Tony Stark in Iron Man: Armored Adventures.He was a charming, freewheeling genius, but TONY STARK's wealthy life of luxury came to an end the day he lost his father in a tragic accident. Now dependent on his own impress... ive technology for survival and dedicated to battling corruption as Iron Man, the once rebellious Tony must reconcile the pressures of his teenage life with his duties as a Super Hero. Thankfully, Tony has the support of his friends, Rhodey and Pepper, when saving the world - or attending high school - proves too treacherous to face alone   more
2 votes
0 comments
Iron Man - Voter Comments
No Comments
Vote & Comment
Leave a comment...
(Maximum 900 words)