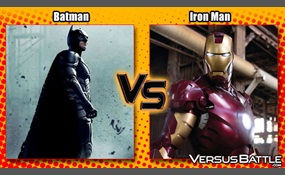 The millionaire playboys of the comic world, Tony Stark better know as The Ironman and Bruce Wayne better none as the Batman

jaksunmadness says2015-06-18T03:31:27.4133485-05:00
Report Post
Even though Ironman knows machines he doesn't know people. Batman would take over Stark Industries using suave business strategies, strip Ironman down to nothing and send him to prison with a limited chest reactor

Jay-D says2015-06-23T01:56:36.4612235-05:00
Report Post
Iron Man is not the only one with armored suits. What people don't know is that Batman's Hellbat armor is stronger than any suit Iron Man has ever produced. And yes, that includes the Bleeding Edge armor. So, there. Even by raw power, Batman can defeat Iron Man. If not that, his superior tactical prowess and cunning in battle should leave no doubt to the outcome. Stark is more intelligent than Wayne, but Wayne is the smarter and more devious man. And smartness trumps intelligence when it comes to battle.
Vote & Comment
2

Adrian Petriw is the voice of Tony Stark in Iron Man: Armored Adventures.He was a charming, freewheeling genius, but TONY STARK's wealthy life of luxury came to an end the day he lost his father in a tragic accident. Now dependent on his own impress... ive technology for survival and dedicated to battling corruption as Iron Man, the once rebellious Tony must reconcile the pressures of his teenage life with his duties as a Super Hero. Thankfully, Tony has the support of his friends, Rhodey and Pepper, when saving the world - or attending high school - proves too treacherous to face alone   more
5 votes
0 comments
Iron man - Voter Comments
No Comments
Vote & Comment
Leave a comment...
(Maximum 900 words)

KernGordon says2015-06-15T13:27:31.0050926-05:00
Report Post
I absolutely hate the fact that you guys are being biased in this poll taking, I am asking you to actually consider the situation and come up with a proper decision whether you like the outcome or not, saying "It's clear that Batman wins! :)" or "He's Batman! Nuff said!" are not valid reasons and to see those as answers genuinely piss me off, so I gonna ask you to not give such nonsense for answers!!!! Thank you
Privacy Policy | Terms of Use
Sitemap | View Desktop Version
©2020 Debate.org. All rights reserved.