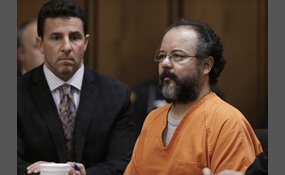 Is Ariel Castro evil or just mentally ill or "sick"?

If your not familiar with the Cleveland kidnappings Ariel Castro kidnapped three women between 2002 and 2004 and helix them captive for over 10 years. He kept them chained up in his basement and in upstairs rooms where he repeatedly raped, beat and tortured them. He had a child with one of the victims Amanda Berry who is now 7. His third victim Gina Dejesus was kidnapped when she was only 14 and the most chilling part is she was Castro's daughters best friend and very good friends with her family. He would

Yes he is evil.

He is evil and mentally ill.

3 votes
1 comment
He is evil and mentally ill. - Voter Comments

He is not be a bad man he is just sick.

0 votes
0 comments
He is not be a bad man he is just sick. - Voter Comments
No Comments
Vote & Comment
Leave a comment...
(Maximum 900 words)

Dilara says2014-05-23T18:59:36.7944255-05:00
Report Post
I just noticed I made lots of typos. Helix should be held. Also I meant to say that Castro was good friends with Gina's family as well as the father of her best friend. It doesn't show the rest of the paragraph. He would punch Michele Knight in the belly when she got pregnant so she would miscarry and than force her to look at the dead baby.

Juan_Pablo says2014-05-24T05:51:59.3901300-05:00
Report Post
Ariel Castro committed some very evil acts, regardless of his mental state. Do these acts make him evil? Well, if he wouldn't have killed last year and if he showed genuine remorse and a change in attitude and views during his lifetime prison sentence, I think it would be fair to say he was ONCE an evil man--but no longer. But since he took his own life shortly after being sentenced by the Court, I think it's accurate to say he DIED an evil man.

Juan_Pablo says2014-05-24T05:53:55.2528154-05:00
Report Post
The truth is non-evil men do not do what Ariel Castro did to the women he incarcerated in his home and whom he regularly abused. Non-evil people simply do not participate in that kind of behavior.

Kreakin says2014-05-25T08:09:10.8056526-05:00
Report Post
I'm not sure if there's any such thing as evil. He certainly lacked empathy and in so was able to use people for his own gratification without guilt. Colloquially that is evil but really just a lack of empathy and very selfish. It probably worsened over the years as he desensitised. He killed himself when it was summarised for him by the court maybe.
Privacy Policy | Terms of Use
Sitemap | View Desktop Version
©2021 Debate.org. All rights reserved.