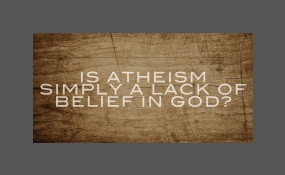 Is atheism the default position?

Is a "lack of belief" possible? This boils down to theory of mind. State your position and reasoning. Shall the default be founded in Tabula Rasa or Epistemological Pluralism?

Yes, Atheism is the Default Position

Tabula Rasa, or a similar mental model, indicates that a lack of belief is the default attitude toward mental content.
11 votes
1 comment
Yes, Atheism is the Default Position - Voter Comments

reece says2014-07-29T16:39:12.2120172-05:00
Report Post
"lack" is being without somthing or not having enough of something (atheist).So infants minds are to premature to comprehend a god thus their without one.It rules being agnostic out and definitely theist.
Vote & Comment
2

No, Atheism is not the Default Position

Mental pluralism dictates that ambivalence is the default position.
7 votes
1 comment
No, Atheism is not the Default Position - Voter Comments

No, it is not. Atheism would imply knowledge of the concept of a "god" - the dictionary states that atheism is a REJECTION in BELIEF of a god

0 votes
0 comments
No, it is not. Atheism would imply knowledge of the concept of a "god" - the dictionary states that atheism is a REJECTION in BELIEF of a god - Voter Comments
No Comments
Vote & Comment
Leave a comment...
(Maximum 900 words)

reece says2014-07-29T20:08:22.9029720-05:00
Report Post
@Formerland1 A agnostic is a person who believes that nothing is known or can be known of the existence or nature of God.And i don't think that would be a default of an infant because of how complicated that thought process is.

Molzahn says2014-07-30T10:45:05.0064500-05:00
Report Post
Lexicography is the study of how language is used. Lexicographers compile dictionaries and do so descriptively of word usage, not prescriptively (i.E. Dictionaries don't instruct you how a word ought be used, only how it is commonly used). Most quality dictionaries describe atheism as "A disbelief in God." Describing atheism as a "lack of believe" is a fairly new convention and has a heavily unwarranted bias toward Tabula Rasa (and the like). I reject there is such a thing as a "lack of belief," as described in Tabula Rasa, and thereby reject atheism as the inherent default.