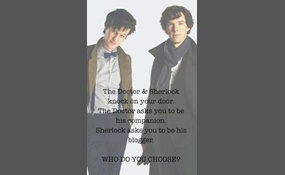 Is Doctor who or Sherlock the better show?

Doctor Who is a 2005 TV series.
9 votes
3 comments
Doctor Who - Voter Comments

Doctor who and Sherlock are equally amazing!!

Sherlock is a British television crime drama that presents a contemporary adaptation of Sir Arthur Conan Doyle's Sherlock Holmes detective stories. Created by Steven Moffat and Mark Gatiss, it stars Benedict Cumberbatch as Sherlock Holmes and Martin...  Freeman as Doctor John Watson. Nine episodes have been produced, the first three of which aired in 2010. Series two aired in 2012, and a third series aired in 2014. The third series has become the UK's most watched drama series since 2001. Sherlock has been sold to over 200 territories. Sherlock depicts "consulting detective" Holmes, assisting the Metropolitan Police Service, primarily Detective Inspector Greg Lestrade, in solving various crimes. Holmes is assisted by his flatmate, Dr John Watson, who has returned from military service in Afghanistan. Although the series depicts a variety of crimes and perpetrators, Holmes' conflict with his archnemesis Jim Moriarty is a recurring feature. Molly Hooper, a pathologist at St. Bart's Hospital occasionally assists Holmes in his cases. Other recurring roles include Una Stubbs as Mrs Hudson, Holmes and Watson's landlady; and co-creator Mark Gatiss as Sherlock's brother, Mycroft Holmes. Sue Vertue and Elaine Cameron of Hartswood Films produced the series for the BBC and co-produced it with WGBH Boston for its Masterpiece anthology series on PBS. The series is primarily filmed in Cardiff, Wales. North Gower Street in London is used for exterior shots of Holmes and Watson's 221B Baker Street residence. In January 2014, executive producer Steven Moffat has announced that a fourth series has been commissioned, with scripts being planned   more
4 votes
0 comments
Sherlock - Voter Comments
No Comments
Vote & Comment
4