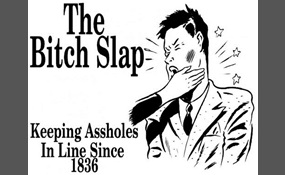 Is it okay for a woman to open hand slap a man for humiliating/disrespecting/making her cry?

Assuming the female is not a body builder and the man is a man. For as long as I know that's been socially acceptable virtually everywhere. It makes sense. It hurts the man only enough to get the point across (except their ego) and make them stop. Some men would need to knock the woman out to feel big though.

mgm5790 says2017-06-07T07:35:20.6774704Z
Report Post
As a traditionalist I would say it is wrong and shouldn't be done but that it isn't a huge deal. On the flip side, a man should never, ever strike a woman. However, the current feminist movement goes far beyond treatment of equality and respect. Gender roles are seen as a threat to women as if a woman who wants to be a homemaker isn't living a valuable life; In heavy labor jobs, women expect the same pay for less productivity; affirmative action is being used to make sure that females are certain percentage of company's executives rather than the most qualified candidate regardless of gender, ETC. ETC. This notion of equality is thrown out of the window when it benefits women: men should still offer to carry the heavier boxes, not cuss or make crude jokes with other males if a female is present, pick up the bill at the restaurant, etc. A slap in the face to men is exactly that. It is turning back on the call for "equality." Regardless of how one views gender roles, men and woman are equal under the law. Slapping equates to assault. So no, a woman cannot slap a man (even if he rightfully deserves it) because it is illegal.

Testerga says2017-06-22T00:20:54.1845267Z
Report Post
Is it okay for a man to open hand slap a woman for humiliating/disrespecting/making him cry? If the answer to the above is NO, then the reverse should be the same. Such is gender equality, isn't it?

dylanoliver says2017-06-23T20:25:58.7497981Z
Report Post
If this is okay, then it is okay for a man to do the same to a woman, where in that case everyone would freak out. So no, it's not okay, unless you consider a man hitting a woman for the same reason okay. Also, when you say "the man is a man" I'm not sure if you're referring to transgender males, but they are male too. And don't say "but they're as weak as women" because plenty of women are stronger than men. Hell, they have to push a baby out of them.

Freddie19 says2017-06-25T08:50:12.2350116Z
Report Post
First of all, women have changed from back then. There is no such thing as chivalry anymore, and women don't prance about in dresses and do whatever they're told anymore. So, if a woman thinks that she can hit a man, because she thinks he's making her cry or angry, then she has no right to hit him. If she does, I encourage all men to hit back because it's terrible how all these women feel like they can hit a man and get away with it. Men don't cry when a women hits them, so they always get away with it. But when a man retaliates, it's either rape or attempted murder. A man should never hit first obviously, but if a woman can hit a man, she isn't very lady-like is she? - the man can hit back. It is not alright for a woman to hit a man.

puppychoo says2017-06-30T23:02:18.6438550Z
Report Post
It's illegal to hit anyone unless you're defending yourself so no absolutely not, unless he's physically harassing her.

Verita says2017-07-19T13:58:57.8025003Z
Report Post
Because it is assault. Just like it would be considered assault if it were done to a woman or a child. Assault is a crime and it violates the rights of others. Why is there this underlying notion that women are exempt? Men and women are equal right? Then leave your hands off each other. Adults don't hit each other out of anger or offense taken. That's how children respond because they haven't acquired the social maturity or communication skills in their development which will eventually teach them we handle our emotions without using violence. Just because women are more vulnerable physically causing the perception that a woman's assault is more egregious doesn't in any rational way exempt them from the same expectations of decent social behavior.

Pacinorock says2018-01-29T01:08:15.9415919Z
Report Post
Since he made her cry he already physically assaulted her by her physical reaction to her emotional response to his insults. Since he chose to tear her down to correct her she has a right to defend herself to get him to stop. Question: Was he blocking her safe passage to leave the room? Has he controlled her financial means to prevent her from not relating to him once he had said his piece?
Vote & Comment
Leave a comment...
(Maximum 900 words)

LuciferWept says2017-06-06T22:54:17.0425291Z
Report Post
If you are okay with a woman hitting a man for "humiliating/disrespecting/making her cry", then you should be okay with a man hitting a woman for the same thing.

kimcal says2017-08-07T08:55:06.6670783Z
Report Post
When a man hits a woman he creates fear in her, when a woman hits a man the same thing does not happen. He might feel humiliated or disrespected but not fearful. I have read so much about domestic violence and know that it is not the same. However I would not say it's okay to hit anyone, but a woman should be able to defend herself in situations when she's being verbally abused or degraded. Women and men are not equal in society and this question therefore is also not equal. No, women should not run around hitting men. No, it's not the same as if a man hits a woman. Yes, defense is okay if you have no other options.