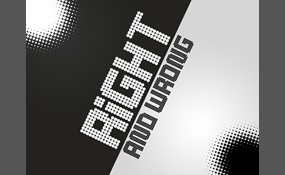 Is right and wrong, aka morality, subjective or objective?

Define subjective as "dependant on the times/people group/commonly accepted norm" and objective as "set in stone, unchangable, permanently determined." Also, for the sake of this poll, morality will be defined as "what a human should and should not do."

Morality can change dependant on the times, where you are in the world, and what is popular at the current time.
7 votes
3 comments
Morality is Subjective - Voter Comments

pakicetus says2015-10-21T00:13:16.2633920Z
Report Post
Refer to the is-ought problem. All forms of morality are, fundamentally, based on subjective premises and assumptions that cannot be proven or disproven.

ladiesman says2015-10-21T18:03:30.3452254Z
Report Post
The focus of morality has changed over time; ancient and medieval philosophers emphasized what is "good", whereas modern morality focuses on "ought".
Vote & Comment
2
VOTING CLOSED

There is an unchanging standard that mankind attempts to conform to that is permanently and perpetually existent.
5 votes
2 comments
Morality is Objective - Voter Comments

howardly says2015-10-30T22:38:16.4111540Z
Report Post
The perception of what we consider right or wrong is ever-changing. Sure. 200 years ago homosexuality was widely condemned and was considered something unholy and evil - a view held true by most people. Now, people are embracing the idea of non-discrimination and stresses the right to choose our sexuality, and let it guide us. However, the fact that what we perceive something to be morally ''right'' or ''wrong'' changes over time does not bring us to the conclusion that morality itself is ever-changing. What we think it is is not the same as what it really is. 1000 years ago the matter of whether the earth is flat or not was in dispute, but that does not change the fact that the earth is not flat.
Vote & Comment
3
VOTING CLOSED

Certain morals are subjective, others are objective

OneNationUnderGod says2015-10-22T15:59:29.9687994Z
Report Post
It is always right for parents to love all of their children at all times. (example of objective morality). To love one child in the best way may for the moment mean correction or punishment at a particular time, while to love the other in the best way for the moment one may mean giving them a treat. (example of subjective morality)

triangle.128k says2015-10-20T22:26:46.0415234Z
Report Post
Being against things like rape and murder are objective, it's hardwired into your brain. Other morals are more culturally influenced.
Vote & Comment
4
VOTING CLOSED

Morality does not exist.

Nihilism is a philosophical doctrine that suggests the negation of one or more reputedly meaningful aspects of life. The Greek philosopher and Sophist, Gorgias, is perhaps the first to consider the Nihilistic belief. Most commonly, nihilism is prese... nted in the form of existential nihilism, which argues that life is without objective meaning, purpose, or intrinsic value. Moral nihilists assert that morality does not inherently exist, and that any established moral values are abstractly contrived. Nihilism can also take epistemological or ontological/metaphysical forms, meaning respectively that, in some aspect, knowledge is not possible, or that reality does not actually exist.The term is sometimes used in association with anomie to explain the general mood of despair at a perceived pointlessness of existence that one may develop upon realising there are no necessary norms, rules, or laws. Movements such as Futurism and deconstruction, among others, have been identified by commentators as "nihilistic" at various times in various contexts   more
1 vote
0 comments
Morality does not exist. - Voter Comments
No Comments
Vote & Comment
Leave a comment...
(Maximum 900 words)