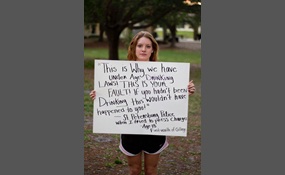 Is teaching someone (more likely a woman) to attack his/her rapist in self-defense victim-blaming?

Would it be victim-blaming to say, "Of course it's not your fault you got raped. You didn't cause it. The rapist did. But you if can, you have to kick his/her ass the best you can." ?????

The Yankees Entertainment and Sports Network is an American cable and satellite television regional sports network based in New York City, New York; it broadcasts a variety of sports events, with an emphasis on New York Yankees baseball games, and B... rooklyn Nets basketball games. The channel is primarily owned by 21st Century Fox, with Yankee Global Enterprises owning a 20% interest. In fall 2013, YES began carrying Fox Sports programming that was previously shown on MSG+.YES Network's offices are based at the Chrysler Building in Manhattan. YES programming, including Yankees and Nets pre- and post-game shows are produced in studios that are located in Stamford, Connecticut. YES Network debuted on March 19, 2002. The channel is available locally in New York, New Jersey, Connecticut, and parts of Pennsylvania; it is available nationally on DirecTV and in the sports tier of cable systems, and regionally on AT&T U-verse and Verizon FiOS   more
0 votes
0 comments
Yes - Voter Comments
No Comments
Vote & Comment
Leave a comment...
(Maximum 900 words)

Episteme says2015-04-09T18:29:26.4984560-05:00
Report Post
I would have to say yes here, but I don't really want to go with the 'Yankees Entertainment and Sports Network' as part of my answer. Anyway, it is a form of victim blaming. Now, I can see how people on the surface might think, 'No, I'm just saying that learning self-defense is common sense.' Unfortunately, this only contributes to the problem because instead of saying, 'Let's, as a community, combat this issue.' The person saying that 'common sense' should be given to the victim is actually saying, 'You're in this on your own.' By indirectly stating that they are in the situation on their own, you are blaming them for not learning self defense prior to the incident. That shouldn't be the case. Also, the problem with this discussion is that there seems to be quite a bit of confusion between 'descriptive' and 'normative' terms. (Descriptively means this is what is currently happening. Normatively usually asks, although this is the case now, what should actually be done?) Yes, descriptively, it would be wiser to learn self defense, but on a normative level, a woman or a man shouldn't have to learn self defense to feel safe and secure.

Stefy says2015-04-09T20:29:28.0542192-05:00
Report Post
It isn't victim blaming to teach self defense for women. However, that shouldn't be the expectation. You can't use self defense training as the solution to rape in society overall. You have to change the culture and educate people not to do so in the first place and all that. You can't say "she should have learned self defense" and you can't just say "ok women well your not respected enough in society to be able to walk alone at night so this is the solution we came up with just fight the guy" because 1, that might not work she could be overpowered, and 2, it may help in individual cases but overall it doesn't fix the problem.

TheINFJNala says2015-04-09T22:27:19.0394361-05:00
Report Post
Episteme, of course we have to educate people not to rape! But teaching someone how to fight back is not blaming them if they get assaulted. Why? Because we know they didn't cause it, and we should spend more of our time tracking down the rapist than telling her what she should have done. But simply saying, "If you are ABLE to kick his ass, then you show him who is boss." I always believed this. If a guy starts touching you against his will, knock him out, then call the police. That way he'll get his punishment. We teach people not to steal, as we should, but that doesn't always stop them. Telling someone not to hurt another doesn't mean they'll always listen. When they don't listen, THAT's when you fight back. But I would never believe it to be the victim's fault, because self-defense is not a guaranteed prevetion of rape. You're right, the rapist could easily still hurt her. So I'm not victim blaming. Rape is a horrendous crime that anyone commits should be punished severely. But the world isn't a place where you tell someone to do something and they always listen. I wish it wasn't true. I wish we wouldn't have to teach warning signs or self-defense methods, but the world's an imperfect place. Nevertheless, I'll be there to support rape victims, no matter what happened. Mister-Man, that was a horribly offensive hyperbole to make your point. Don't call feminists people with single digit IQs. That's going way too far.