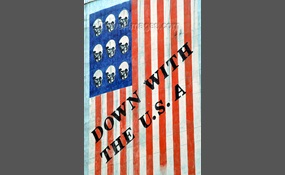 Is the anti-American sentiment on the internet reasonably deserved?

The Yankees Entertainment and Sports Network is an American cable and satellite television regional sports network based in New York City, New York; it broadcasts a variety of sports events, with an emphasis on New York Yankees baseball games, and B... rooklyn Nets basketball games. The channel is primarily owned by 21st Century Fox, with Yankee Global Enterprises owning a 20% interest. In fall 2013, YES began carrying Fox Sports programming that was previously shown on MSG+.YES Network's offices are based at the Chrysler Building in Manhattan. YES programming, including Yankees and Nets pre- and post-game shows are produced in studios that are located in Stamford, Connecticut. YES Network debuted on March 19, 2002. The channel is available locally in New York, New Jersey, Connecticut, and parts of Pennsylvania; it is available nationally on DirecTV and in the sports tier of cable systems, and regionally on AT&T U-verse and Verizon FiOS   more
10 votes
6 comments
Yes, it is - Voter Comments

komododragon8 says2015-06-15T16:37:48.2874515-05:00
Report Post
Firstly criticism is incredibly important in improving the nations condition. To improve America we must remember all that America has done wrong so that we can avoid it in the future. Plus the US certainly has a ruthless history (slavery, jim crow, coups against legitimate governments, support of ruthless dictators)

9 votes
3 comments
No, it is not. - Voter Comments

Forthelulz says2015-06-15T01:39:56.2412188-05:00
Report Post
It's either someone insufferably arrogant, who thinks they have the next great thing, or some whiny kid who just heard how great communism is, in theory, and didn't bother to fact-check. There is a lot of overlap.

Wolf_Fang says2015-06-15T09:35:23.4784607-05:00
Report Post
TBR, has there ever been once that you understood and voted on something without directly contacting the author for further information? Apparently seven other people got what the poll was asking.

reece says2015-06-15T14:14:29.3731041-05:00
Report Post
@Wolf_Fang Can you give me an example of anti-American sentiment that you've read? So i know what you're basing this poll on. Would you consider me criticizing the political corruption or the bias news propaganda as anti-American?

hect says2015-06-15T18:22:28.7054800-05:00
Report Post
"I am Hect. And I see a whole army of my Users, here in defiance of tyranny! You have come to fight as free men. And free man you are! What will you do without freedom? Will you fight?" "Two thousand against ten?" - imabench shouted. "No! We will run - and live!" "Yes!" Hect shouted back. "Fight and you may be banned. Run and you will live at least awhile. And leaving the site in your bed many years from now, would you be willing to trade all the days from this day to that for one chance, just one chance, to come back here as young users and tell our censoring enemies that they may ban our accounts but they will never take our freedom!!!" https://www.Youtube.Com/watch?V=lEOOZDbMrgE

Wolf_Fang says2015-06-15T23:18:04.2792007-05:00
Report Post
1. When I said anti-American sentiment, I did NOT mean criticism. I am all for criticism. I meant illogical and arrogant comments like (I am quoting these from various sites) "stupid f*cking americans those fat lazy basta*rds" "just like every other American- a war machine" "please get off this site if you are American" 2. I am respectfully asking TBR to stop trolling my polls. He seems to always have something smart to say which benefits no one.