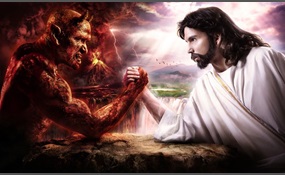 Is the Christian God morally nice?

In many mythological, folklore and religious traditions, hell is a place of eternal torment in an afterlife, often after resurrection. It is viewed by most Abrahamic traditions as a place of punishment. Religions with a linear divine history often d... epict hells as eternal destinations. Religions with a cyclic history often depict a hell as an intermediary period between incarnations. Typically these traditions locate hell in another dimension or under the Earth's surface and often include entrances to Hell from the land of the living. Other afterlife destinations include Heaven, Purgatory, Paradise, and Limbo.Other traditions, which do not conceive of the afterlife as a place of punishment or reward, merely describe hell as an abode of the dead, a neutral place located under the surface of Earth. Modern understandings of hells often depict them abstractly, as a state of loss rather than as fiery torture literally underground, but this view of the concept of a hell can, in fact, be traced back into the ancient and medieval periods as well. Hell is sometimes portrayed as populated with demons who torment those dwelling there   more
26 votes
6 comments
Heck, no. - Voter Comments

V5RED says2015-09-08T15:47:57.3282322Z
Report Post
No, the god of the bible is a moral monster. He commits genocide, endorses slavery, murder, and rape, and if you do not believe in the guy who is playing the world's longest game of hide and seek, he will torture you forever. Thankfully, he is not real.

K8 says2016-06-06T05:18:19.1436961Z
Report Post
I cannot vote, as the question makes no sense. "Nice" is not a moral position. Someone can be just as nice while they are committing morally wrong actions as when they are doing good. "Is God morally just?" would make more sense, and to that question I can answer yes. He is a God of mercy but also of justice, of righteousness but also of righteous anger, and while he loves his creation, he also cannot abide by sin and therefore is a God of wrath as well as of love.
Privacy Policy | Terms of Use
Sitemap | View Desktop Version
©2021 Debate.org. All rights reserved.