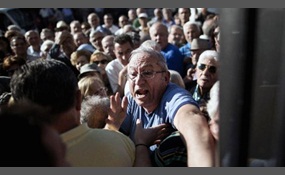 Is the United states going the way of Greece?

With our national debt geting out of control what are the chances of the U.S. becoming like Greece.

Jack_D says2015-07-21T00:51:50.9322222-05:00
Report Post
Anyone who says yes needs to learn basic economics. The dollar is the world's reserve currency, while Greece does not even have its own currency. If the national debt were really as great a problem as many doomsayers think, why are interest rates so low? A credit risk has large borrowing costs, as anyone who has gone to a payday loan company knows.

CronyMan says2015-07-25T23:18:51.6554390-05:00
Report Post
America is able to print money, since the dollar is used for most international trade, price inflation will be exported to the rest of the world. This freshly created new money is first used by the financial sector, where it enters the system, to make purchases at price levels that have not increased due to increased amounts of money. As long as this situation is maintained America can not be the next Greece.

In linguistics, a yes–no question, formally known as a polar question, is a question whose expected answer is either "yes" or "no". Formally, they present an exclusive disjunction, a pair of alternatives of which only one is acceptable. In English, ... such questions can be formed in both positive and negative forms.Yes–no questions are in contrast with non-polar wh-questions, with the five Ws, which do not necessarily present a range of alternative answers, or necessarily restrict that range to two alternatives   more
9 votes
4 comments
Yes - Voter Comments

Forthelulz says2015-07-20T00:21:14.7537250-05:00
Report Post
Considering the unfortunate culture of dependence that previous politicos have fostered, unless we kill welfare and firebomb our inner cities at the same time, we'll have problems.

cludwig says2015-07-20T16:24:00.3470244-05:00
Report Post
The U.S. is following an identical course. Greece is in the mess it is in because of debt and unfunded pension and social benefit liabilities. Unfortunately, the U.S. unfunded social security liability is 3 trillion dollars and growing. Detroit went bankrupt because of these issues. Furthermore, hundreds of U.S. cities are on the brink of going broke as well. The U.S. dollar will implode as the current system cannot be sustained for much longer.

Alyou says2015-08-16T04:45:15.3684167Z
Report Post
I see too many people choosing not not work or to disabled to work. Too much faith in government to provide for everybody. We live a world of limited resources.
Vote & Comment
No comments yet.
Leave a comment...
(Maximum 900 words)
Privacy Policy | Terms of Use
Sitemap | View Desktop Version
©2020 Debate.org. All rights reserved.