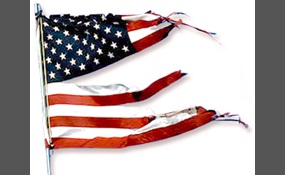 Is the United States going to have a second Civil War within the next decade?

SweetTea says2014-04-13T03:27:45.7294775-05:00
Report Post
No. There will be encounters with small groups of anarchists & other nut cases like Ruby Ridge, Waco, etc. -- not Civil War. The vast majority of Americans aren't going to war, because a few extremists want their way like spoiled preschoolers!

pozessed says2014-04-13T07:41:25.4538083-05:00
Report Post
I am voting for what I hope will happen. I think us Americans are intelligent enough to get what we want without waging war against our government. Just because that is how I like to think doesn't make it true though.

"Civil War" is a 2006–2007 Marvel Comics crossover storyline built around a self-titled seven-issue limited series written by Mark Millar and penciled by Steve McNiven, which ran through various other titles published by Marvel at the time. The stor... yline builds upon the events that developed in previous Marvel crossovers, particularly "Avengers Disassembled", "House of M", "Decimation", and "Secret War". The tagline for the series is "Whose Side Are You On?   more
5 votes
0 comments
Civil War - Voter Comments
No Comments
Vote & Comment
Leave a comment...
(Maximum 900 words)

msjupiter says2014-04-13T18:07:29.9860341-05:00
Report Post
I hope I'm wrong but I believe that a lot of Americans are upset about the Constitution being trampled and Obama bringing our country down. Both in the eyes of Americans and in the eyes of the world we are looking very weak. If we don't change things very soon the dollar will devalue and many people will be left without jobs and homes and nothing else to do but get angry and fight for a change. Unfortunately Homeland security has grown almost the size of our military(just as Obama promised) and I'm not sure that a lot of Americans will be able to find ammo or guns to protect ourselves.

Chimera says2014-04-13T18:11:50.3604476-05:00
Report Post
Revolution is going to happen eventually, though probably not within the next decade. It might not even be violent when it does happen. But of course, it will happen. It is simply how government is designed.

Comrade_Silly_Otter says2014-04-13T18:16:57.2368703-05:00
Report Post
No.. Obama isn't bringing this country down, we are. We are the ones letting the Richest 1% do as they please well the rest off us get poorer are poorer. We don't look weak to the rest of the world, we look stupid. We spend over 600 billion dollars on our military budget instead of our own people. We fight war on Poor people not Poverty. Why do we need Welfare some ask, well I am sure no one wants Bread Riots in the Streets. Its stupidity to think that Government will oppress us when we are already oppressed from Wealth Inequality. We don't need Guns, we need motivation and a want to create the perfect world we dreamed off when we where young, a world where everyone can eat healthy food, drink clean water, have a home and an education ( Not to forget Hover cars ). The Problem isn't Government, it never has been. If you want to stop the corruption you got to get it at the source, the Corporations. Making new loopholes and polluting, abusing the World Bank, feeding our own people unhealthy food and then giving us overpriced healthcare and bad meds.

discomfiting says2014-04-14T10:46:13.0006296-05:00
Report Post
Msjupiter, the constitution has been being trampled since it existed. It was never not being trampled over, exploited, or loopholed and you're a moron if you think obama (and just democrats) do it. It' been done by bush and republicans countless numbers of times too.

finamorebarbara says2015-11-20T02:41:44.4669633Z
Report Post
I love how people think this could never happen again. How is this idea ridiculous? Another civil war could definitely happen in the future. Most people in America get their facts from the media, the media is known for lying and quite honestly trying to cause chaos. Think about it, about 20 states are refusing to take in syrian or iraqui refugees, our currently president seems to not care about what the people want and wants to take the refugees anyway, don't you think that could be a reason for people to fight agaisnt each other?

ReneeWallace says2016-11-26T09:05:19.1049934Z
Report Post
Msjupiter-Get your facts straight. Since Obama took office, unemployment is way, way down, the deficit is down, the trade deficit is down and the economy is growing once again. Try reading some real news like on the Daily Kos or Alternet instead of the major media which is owned by only six far right corporations. You are so easily brain washed!!!!
Privacy Policy | Terms of Use
Sitemap | View Desktop Version
©2021 Debate.org. All rights reserved.