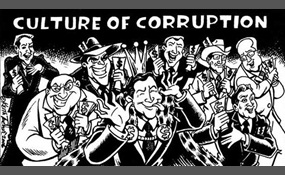 Is the United States government corrupt?

Is the entire government corrupt or are just parts of it corrupt and if so, which parts? Or is the US not corrupt at all?

Yes, just like George Washington predicted, political parties in general are the downfall of this country

11 votes
2 comments
Yes, just like George Washington predicted, political parties in general are the downfall of this country - Voter Comments

discomfiting says2014-04-07T00:47:39.0378229-05:00
Report Post
George Washington predicted it and so did James Madison in the Federalist No. 10. Democrats & Republicans are the issues; not just one party. They both have their fair share of bribery, lies, and corruption. We would be a lot better off if we had more political parties than just two major ones.
Vote & Comment
2

Yes, the Democrats have corrupted the system

Yes, it is corrupt but it is as pure as any government will ever be

4 votes
1 comment
Yes, it is corrupt but it is as pure as any government will ever be - Voter Comments

Jifpop09 says2014-04-07T00:48:39.2911945-05:00
Report Post
You set no standards for what defines corrupt, so I'll set my own. All nations have corruption in them, fortunately ours ranks pretty good on most indexes. Most of the negativity also stems from special interest groups, and not bribes and political gain.
Vote & Comment
4

Yes, the Republicans have corrupted the system

Yes, the government of the United States is completely and hopelessly corrupt

0 votes
0 comments
Yes, the government of the United States is completely and hopelessly corrupt - Voter Comments
No Comments
Vote & Comment
6

No, the United States is not corrupt

0 votes
0 comments
No, the United States is not corrupt - Voter Comments
No Comments
Vote & Comment
Leave a comment...
(Maximum 900 words)

Jifpop09 says2014-04-07T02:50:59.7310483-05:00
Report Post
What do you think I'm exactly disproving? No standard for what defines corruption exists, so I made my own. Every nation has corruption, and the US has a lot less then other nations. And while I disagree with your article, and feel that HDI has not the slightest connection with the CI, the US has a high HDI as well. Just stop.

brant.merrell says2015-09-26T00:56:38.5430398Z
Report Post
Washington's quote doesn't use the word "corruption". Most of us concluded we dislike political parties at some point in grade school, and we all agree with the father of our country, but the quiz nonetheless seems engineered to steer voters towards a single answer.
Privacy Policy | Terms of Use
Sitemap | View Desktop Version
©2021 Debate.org. All rights reserved.