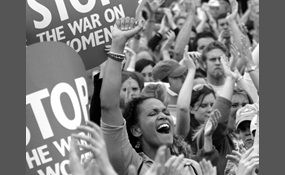 Is there a war on women?

What do you think?

MyDinosaurHands says2014-07-01T20:50:43.6970974-05:00
Report Post
I think there is a war on anything that could be construed as even remotely sexist towards women, so much so, that sometimes things get sexist towards men.

doublehelix says2014-07-02T15:20:10.7936948-05:00
Report Post
I'm a woman, and I say this is being pushed on people to divide the sexes even more. Women are being told they need to go into science fields because there aren't "enough" of them in them, but in reality, so many only try to go into them because it's trendy now. Businesses hire women now, like some kind of a group, and you can't hire people as a group. What happened to individuality?

mollyp4321 says2014-07-03T12:12:35.3917854-05:00
Report Post
Most actual feminists are slowly changing opinions more and more but admit there is not out right war however internet feminists are a different matter, if anything they are causing a war on men.
Vote & Comment
2

Rome is a city and special comune in Italy. Rome is the capital of Italy and also of the Province of Rome and of the region of Lazio. With 2.9 million residents in 1,285.3 km², it is also the country's largest and most populated comune and fourth-mo... st populous city in the European Union by population within city limits. The urban area of Rome extends beyond the administrative city limits with a population of around 3.8 million. Between 3.2 and 4.2 million people live in Rome metropolitan area. The city is located in the central-western portion of the Italian Peninsula, within Lazio, along the shores of Tiber river. Vatican City is an independent country within the city boundaries of Rome, the only existing example of a country within a city: for this reason Rome has been often defined as capital of two states.Rome's history spans more than two and a half thousand years, since its legendary founding in 753 BC. Rome is one of the oldest continuously occupied cities in Europe. It is referred to as "The Eternal City", a central notion in ancient Roman culture   more
3 votes
1 comment
Rome - Voter Comments

dietorangesoda says2014-07-01T21:37:05.8534205-05:00
Report Post
Brian really? Last time i checked gay marriage is legal in 17 states and at least 15 countries around the world so what war are u talking about? Whereas women can no longer get there birth control because of some corporations religious views

dietorangesoda says2014-07-01T21:59:30.8721896-05:00
Report Post
Dilara this isnt just about abortion its about how women's rights in america are constantly being eroded by the politicians look at what they've about rape victims and now with the birth control thing and 2nd of all abortion is a woman's right and you have no right to tell a woman what she can and can't do with her body

Dilara says2014-07-01T22:04:22.5144726-05:00
Report Post
I can tell her what to do with her body if she's harming someone... Like a baby...Her own baby. What kind is sociopath would kill their own child because they "want to focus on their career" or "they aren't ready" if you had unprotected sex than you can suffer the consequences--not an innocent baby. A human life especially a baby's life is not someone's choice. Abortion is murderer. You were a fetus once. Everyone was a fetus once. That could have been you if your mother was a cruel sociopath or me or anyone else. A fetus has the same rights that ant person.

dietorangesoda says2014-07-01T22:07:25.6752667-05:00
Report Post
Dilara first of all that is a fetus not a baby it is not yet a person there is no difference between an embryo and a tadpole look it up if you dont believe me and 2nd of all how would u feel if you got pregnant at 15 or 16 years old the father abandones you and you have to drop out of school what if your family kicks u out because of it? Would u really want to have the baby and be stuck for the rest of your life?

discomfiting says2014-07-01T23:21:02.8208208-05:00
Report Post
I would care to argue that adoption is not a suitable alternative for abortion. I personally have lived through the typical chain of dilapidated foster homes, psychological & emotion neglect along with the mental state of feeling like an object in a store because adoption centers, orphanages or whatever word you want to use, is nothing more than human trafficking. Luckily, I didn't kill myself unlike most orphans that end up committing suicide or end up as drug addicts, alcoholic, or involved in illegal crimes such as gang violence, domestic abuse and other crimes like most orphans do. There is a War on women in countries like China and North Korea where they are forced to get an abortion (meaning against their will) or in other countries where women can't vote or be a politician or drive (like running for president or any government position) like Iran, Cote d'Ivoire, Mauritania, Syria, Chad, Pakistan and Yemen or in some countries where women or in other countries where women cannot own land like Iraq and the list goes on. I think it was just within the last year or so where women were given the legal right to drive and women would be allowed to vote or run in the next election or whatever but my point remains valid because just because it is legal, doesn't mean they are given equal opportunities. There is a lot of prevention that goes on in order to minimize women owning land in countries where they can but it's a nearly impossible struggle like India or in other countries where education. Or how in most countries, women still get paid less than men for the same exact job like the entire middle east, most of Africa, European countries like Italy, then you have Japan, and all the islands between Australia/NZ and Eurasian continent along with a bunch of random countries in South America. This isn't even talking about the society's cultural views of selective social norms, mores and folkways that create double standards for women and are unfair. When women are rejected jobs because people look at them as inferior like they can't do the job simply because of their gender, or are forced into sexual acts just to have a job or keep their job, or get sexually or verbally harassed, there is a war on women. There is sexism in the workplaces, there is a gender pay gap, there are double standards for women and unfairness towards them politically, socially and economically just because of their gender more so in some countries than others but it's still there!