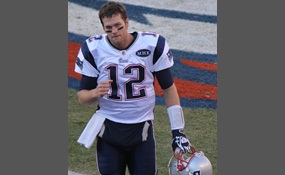 Is Tom Brady the best QB

Thomas Edward Patrick Brady, Jr., known universally as Tom Brady, is an American football quarterback for the New England Patriots of the National Football League. After playing college football for the University of Michigan, he was drafted by the ... Patriots in the sixth round of the 2000 NFL Draft.In Brady's fourteen seasons as a starter, the Patriots have earned five trips to the Super Bowl, winning three. He has also won two Super Bowl MVP awards, two league MVP awards, has been selected to nine Pro Bowls, and has led the Patriots to more division titles than any other quarterback in NFL history, with eleven. He is currently fifth on the all time list for career passing yards and fifth for career touchdown passes. His career postseason record is 18–8; his playoff win total is the highest in NFL history. He helped set the record for the longest consecutive win streak in NFL history with 21 straight wins over two seasons. He also set the record for most consecutive playoff wins with 10, and in 2007 led the Patriots to the first undefeated regular season since the institution of the 16-game schedule   more
2 votes
0 comments
Tom Brady - Voter Comments
No Comments
Vote & Comment
2

Mark Travis John Sanchez is an American football quarterback for the Philadelphia Eagles of the National Football League. He was drafted in the first round of the 2009 NFL Draft as the fifth overall pick by the New York Jets. He played college footb... all at the University of Southern California.Sanchez grew up in a well-disciplined and athletic family. In the eighth grade, he began to play football and learn the intricacies of the quarterback position, training with his father, Nick. A well-regarded prospect, Sanchez committed to Southern California following his successful high school career in which he led his team to a championship title during his final season. At USC, Sanchez was relegated as the backup quarterback during his first three years though he rose to prominence due to his brief appearances on the field in 2007 due to injuries suffered by starting quarterback John David Booty. Sanchez also became popular within the community due to his Mexican-American heritage. Named the starter in 2008, Sanchez led USC to a 12–1 record and won the Rose Bowl against Penn State for which Sanchez was awarded the Most Valuable Player award for his performance on offense   more
1 vote
0 comments
Mark Sanchez - Voter Comments
No Comments
Vote & Comment
Leave a comment...
(Maximum 900 words)