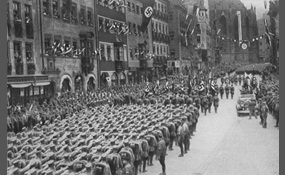 Is war caused by collectivism?

No one ever goes to war for THEMSELVES. They go to war for their RELIGION or their COUNTRY or their CULTURE or some other form of COLLECTIVE. If people were more selfish and inidvidualized war might not happen?

Yes but war for land would still exist

No, war has nothing to with collectivism

3 votes
2 comments
No, war has nothing to with collectivism - Voter Comments

Stefy says2015-05-23T20:41:22.8948251-05:00
Report Post
military industrial conflict. By the way research what collectivism actually is. You can be a part of a group and fighting for a grouo or ideology but that idology is not necessarily collectivist. For example there is a libertarian party but that is not a collectivist ideology.

Razoreye001 says2015-06-05T19:17:10.1939392-05:00
Report Post
War is an unfortunate part of human nature, it's in our natural survival instinct to fight even when we're not threatened. Because willingness to fight contributed much to human survival.
Vote & Comment
3

heil88 says2015-05-23T19:39:42.6082088-05:00
Report Post
I cannot agree with you anymore, in fact the jewish communist leon trotsky who was lenin's 2nd in command personally created the red army to spread red revolution in the west because his trotskyist ideology. Search up trotskyism and it's a horrible ideology.

debate_power says2015-05-29T17:12:28.2646319-05:00
Report Post
Historically, it had more to do with capitalist-esque acquisition of resources and agglomeration that benefited a select few individuals primarily.